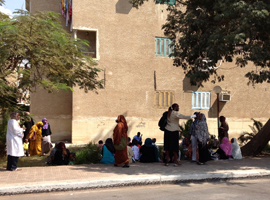 USCCB Delegation to the Middle East

Four members of the USCCB delegation arrived in Antakya, Turkey, October 19th to look at the situation of Syrians and Iraqis from Syria on the Turkish-Syrian border.  (Other members went to Yalova, a satellite city near Istanbul, to speak with Iraqi families.)   There has been much publicity regarding this border, including the shelling of a Turkish village and the death of 5 Turkish citizens.  There are 14 border camps along the Turkish-Syrian border, ranging from southern Hatay province to the city of Ganziantep about three hours northeast.  Two more are scheduled to open soon.   According to Turkish authorities, more than 100,000 Syrian refugees reside in the camps and another 40-50,000 reside in local communities, some with family and/or friends.  The Turkish government has received deserved praise for the conditions of the camps, which include kitchens, air conditioning, and other amenities usually not found in a refugee camp.

The delegation visited Zaatari refugee camp in northern Jordan, where about 35,000 Syrian refugees reside.   Jordan opened the camp in June due to the rising tide of refugees fleeing the conflict in Syria.   Refugees are crossing Jordan's northern border, many fleeing gunfire from Syrian government forces.  The Jordanian army intercepts them, provides them with food and water, and then transports them to the camp, about 30 Kms from Syria.  Jordanian officials have generally received high marks for receiving the refugees, which have totaled as many as 2000 a day, but have confiscated their documents, leaving them vulnerable if they return to Syria.  Many of the men bring their families to the camp and then return to Syria to fight with the resistance.  Stories from the refugees detail the horror of the conflict:  families being ambushed at the border and women describing the death of their husbands.  One woman with children had been shot in the jaw; others spoke of the deaths of their husbands and brothers.  One male refugee told the delegation he knew he had to leave with his family when he witnessed the murder and mutilation of his friend, a journalist attempting to chronicle the conflict.

Reports of Torture in the Sinai

The delegation has just concluded its visit to Cairo, Egypt and learned more details about the trafficking and torture of Eritrean refugees in the Sinai Peninsula.

Last year, USCCB conducted an assessment mission to East Africa.  At that point we traveled to Ethiopia and met with Eritrean refugees escaping poverty and forced military service in their home country. We found that because of limited opportunities in Ethiopia, many young people would continue on to Sudan, Egypt, and Israel.  They search for more viable livelihoods. However, during our time in Cairo, we have learned the grave reality of these treacherous journeys.