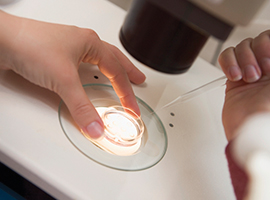 This article is available to order in either English or Spanish.

For a listing of related materials, see page 11 in this year's catalog.

Other Formats of This Article 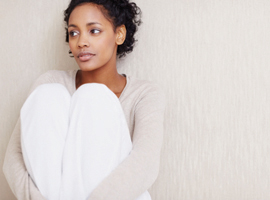 Woven into the very fabric of married love is the desire to bring children into the world. And among the most painful and distressing problems a husband and wife can encounter is the heartache and worry that arise when they find themselves with serious difficulties in conceiving a child of their own.

In reality, the origin of a human person is the result of an act of giving. The one conceived must be the fruit of his parents’ love. He cannot be desired or conceived as the product of an intervention of medical or biological techniques; that would be equivalent to reducing him to an object of scientific technology. No one may subject the coming of a child into the world to conditions of technical efficiency which are to be evaluated according to standards of control and dominion.
-Donum Vitae, II.B.4.c.
Keri and Dan had always wanted to have children, but their careers were going well and they decided to save up for a house first. When they finally tried to conceive, they faced the growing uncertainty and distress that one in six U.S. couples experience. They were struggling with infertility.

They may well have benefitted from thorough testing by an experienced obstetrician. Medical science can remove many of the causes of infertility—for example, correcting a hormonal imbalance, unblocking a fallopian tube scarred by pelvic inflammatory disease, or getting a dad to lose weight and stop smoking. Healthier lifestyles, minor surgeries and hormonal adjustments can allow parents to conceive a child by helping their reproductive systems work as they were designed.

Unfortunately for couples like Keri and Dan, many fertility clinics today seem less interested in identifying and addressing the cause of infertility. Instead, they jump directly to “in vitro fertilization” (IVF) where they attempt to control all factors of timing, embryo creation, and selection—leaving little to nature. IVF is now a $3 billion industry. It is largely unregulated, and seemingly unconcerned about the long term health risks for women or children.

While it is understandable that a couple longing for a child may try virtually anything to reach their goal, there are limits to the morally good and legitimate means for pursuing that goal.

The first and most obvious moral problem raised by in vitro fertilization is that it invariably requires fertilizing several eggs in the laboratory at the same time in order to be marginally effective. Typically, some of the resulting embryos are implanted in the uterus in the hope that at least one will survive. If two or more survive, many clinics offer to later abort some babies (“selective reduction”) so the others have a better chance of surviving and complications are reduced for the mother.

The embryos not implanted are then either discarded immediately or frozen for later use. Many do not survive the freezing and defrosting processes. In reality, the great
majority of embryonic children created by IVF will end up dead, sooner or later. The tendency to commodify any babies that are created in a lab, can be seen in a recent blog post where “urban moms” share their experiences:

I was in a similar situation. 37 at the time with many failed iui [intra uterine insemination attempts] and ivf cycles. We also had a 24 year old donor who produced 20 eggs to be shared. I ended up having 2 put back [in the uterus] and for about 5 seconds we were having twins. We ended up with one healthy little girl and 3 embryos on ice.

What is lost here in the description of many failed technological attempts is that each procedure involved living human beings— individuals with unique DNA, who deserve to be treated with the dignity of human persons. These embryos already contained all that they needed to grow and develop into playful, loveable children except for nutrition and the safe environment of a womb. They should no more be frozen or disposed of like laboratory waste than the rest of us. They bear—as all human beings do—the image and likeness of God, the Father of all.

A less obvious but profound wrong occurs in the separation between the sexual act and the conception of the child. When a man and a woman come together in marriage to bring forth new life, they are acting as “cocreators” with God—“procreating” in cooperation with his unique power to create life. In truth, a child is God’s gift to the parents. But when eggs and sperm are harvested from their bodies and brought together in a laboratory, the couple does no more than supply the raw material for a technician to produce the child, grow him or her in a nutrient culture and insert the child into the mother’s womb. This is done in exchange for many thousands of dollars, and at risk to the mother (or egg donor) and substantial risk to the children conceived.

The deeper meaning of sexual intercourse— uniting the couple in a love so generous and powerful that it allows God to bring forth a new child, destined to live for eternity—is lost in the process. A child has a right to be conceived by an act of love of his parents, not from a laboratory process that amounts to an act of manufacturing new life.

It is easy to see how this mentality enables other abuses as well, resulting from the desire to “manufacture” the best product most efficiently. Embryos produced in a laboratory can be pre-screened for genetic defects or a predisposition to certain diseases, or even for gender and eye color, and thrown out if they fail quality control.

Sometimes couples are willing to pay more for a greater likelihood of high intelligence, attractiveness, and athletic ability in the child they desire. That is why a bright, athletic coed from Stanford may be offered $50,000 to sell her eggs, while other “donors” earn less than $5,000 per harvesting cycle.

Sometimes use is made of a “surrogate” mother who agrees to have someone else’s embryos implanted in her uterus, to deliver the child, and be paid for giving him or her to a couple or individual. Giving a whole new meaning to “outsourced,” the hottest destination for exploiting poor women is now India. One online ad boasts: “We have over 100 Surrogates in our agency available to carry your baby!” Another reads: “40-70% less than U.S. programs! Don’t wait!” A third: “Same Sex? Want a Baby? As Seen on TV. We provide Low Cost Surrogates in India.”

As a result of this rush to manufacture life in the laboratory, our country now faces the terrible dilemma of what to do with the hundreds of thousands of frozen embryos stored in laboratories, most of which will never be implanted or allowed to survive. Those that are allowed to be born may suffer from grave birth defects at double the rate of children conceived naturally.

Nonetheless, every child conceived by in vitro fertilization is truly deserving of respect and love: Each is a human person, regardless of the manner of conception. The problem is that the way they are brought into the world does not live up to their dignity.

And no matter how dearly they are loved by the parents who take them home, children who learn that one or both of their biological parents were no more than DNA donors often write poignantly of their efforts to find their identity and family history.

Sometimes they discover that their biological dad was a serial donor whose sperm was used in creating dozens of siblings all across the country, and who has no interest in getting to know any of them.

Keri and Dan embarked on IVF, not fully understanding the serious health risks involved in the various drugs used, including drugs to hyper-stimulate ovaries so that multiple eggs can be harvested.1 They did not understand that, at age 35, their chance of bringing a baby home was only 25% per treatment cycle.

They did not understand they would be on a rollercoaster of hope and disappointment, and eventually despair. They did not expect the emotional and financial stress of each failed cycle, or the guilt related to the loss of their embryonic children.

In time, Keri and Dan discovered that God’s loving plan for them was to become the adoptive parents of siblings whose biological parents weren’t able to provide for their needs. Others have found that medical care can help them conceive without the high medical and moral costs of IVF. For still others, the desire to nurture children may be fulfilled in mentoring, coaching or teaching.

People must come to understand that reproductive technologies like IVF put the lives of women and children at risk. As Christians, we must all stand for the dignity of every human life as a gift from God, not as a product to be manipulated or mistreated even with the best of intentions.2

2 To learn more about reproductive technologies and Church teaching, visit www.usccb.org/issues-and-action/human-life-and-dignity/reproductive-technology/ where you can read the USCCB’s 2009 pastoral statement, Life-Giving Love in an Age of Technology.