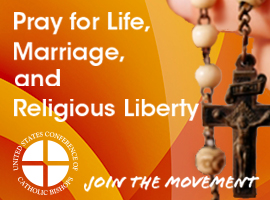 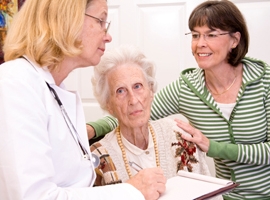 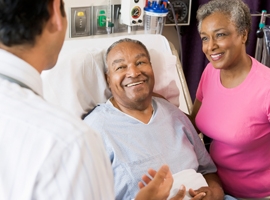 As a medical student I was amazed by the experience of great beauty and love when a baby is delivered. In fact, one of the main reasons I became an obstetrician was for the privilege of helping a mother welcome her child into the world and into the life of her family. I wanted to share in those precious moments when the miracle of life and the grace of God can be felt in an incomparable way. So I decided to seek a residency program in obstetrics and gynecology.

In the months before graduation from medical school, students go through the residency interview process, one of the most exciting, and also career-defining, periods in one’s professional life. It’s the time when students visit various hospitals to learn more about their training programs and to be interviewed for the few residency slots available. My excitement turned to dismay as three training programs in the New York and New Jersey area offered me residency positions, but only on condition that  I would learn to perform abortions during my training, despite my having informed them multiple times that performing abortions was against my Catholic faith and values. When I stood up for my beliefs I was told that I would not be eligible.

Several of my medical school friends encountered similar situations at other medical residency programs, but we didn’t know what to do or what legal protection we had. Fortunately, I was successfully matched to a residency program that did not ask me to violate my beliefs.

Years later I learned that federal law prohibited those institutions from forcing medical personnel to perform abortions and other procedures against their conscience and faith. When I became the 13th United States Assistant Secretary for Health, I worked with numerous professionals and legal experts at the U.S. Department of Health & Human Services to help defend the constitutionally-protected rights of conscience of the many healthcare providers who are discriminated against because of their beliefs and ethical values. Over the years, I’ve met countless numbers of students, nurses, doctors, pharmacists and other healthcare providers who were or who are today confronted with the same dilemmas.

The establishment and growth of Catholic health care has a rich history beginning in 1823, when Catholic sisters first began staffing hospitals. These women manifested their love of God in the midst of their own hardships and suffering, while leading others to discover the love of Christ in suffering. Thus, they sought to integrate their care for the sick and dying with their spirituality.2

Catholic faith-based health care has been and remains an integral part of our nation’s health delivery system.

The Need for Conscience Protection in Law

It is increasingly evident that there are efforts in our country to force medical providers to either perform actions against their personal conscience or leave the profession completely. Faith-based professionals are being driven out of medicine, which in turn will also limit access for patients.

Only robust legal protection of conscience rights will ensure the continued services of many Catholic medical professionals who are working tirelessly to heal and prevent illness.

The Supreme Court’s 1973 Roe v. Wade decision gave new meaning to the need for conscientious objection. Following this decision many physicians, particularly Catholic doctors, refused to take part in procedures that would violate their moral or religious convictions.

Named after, and introduced by, Senator Frank Church, this amendment was the first federal legislation establishing a conscience clause in health care. It states that public officials may not require individuals or organizations who receive certain public funds to perform abortion or sterilization procedures, or to make facilities or personnel available for the performance of such procedures, if this “would be contrary to religious beliefs or moral convictions” (42 USC 300a-7). It remains in law today.

Complementing the Church Amendment, the Coats Amendment was passed by Congress in 1996 to amend the Public Health Service Act. Named after Senator Dan Coats (R-IN), this amendment maintains federal funding and legal status of medical institutions that do not offer or refer for abortion training, and protects individuals who decline to receive such training.

It is also widely accepted, and guaranteed in law, that physicians, nurses and prison employees have a right to refuse to participate in executions for reasons of conscience.

Conscience protection also has critical implications for the performance of medical professionals.

As physicians and medical professionals we constantly confront moral dilemmas in our practice. Our work environment exists in an increasingly complex healthcare system with economic pressures as well as physician and nurse shortages. Emerging moral stressors associated with proposed changes to our profession may have drastic repercussions on the level and quality of care we are able to provide. Several studies have shown that it is important that caregivers work in accord with their moral convictions.

Finally, a Swedish study in 2008 examined factors related to stress and conscience in healthcare. It found that stress increased from not being able to follow one’s conscience or deal with moral problems at work. In order for conscience and moral sensitivity to become an asset instead of a burden, healthcare employees need to be able to express their moral concerns.

What the Second Vatican Council declared in Dignitatis Humanae is as true for medical professionals as it is for all of us:

All are bound to follow their conscience faithfully in every sphere of activity so that they may come to God, who is their last end. Therefore, the individual must not be forced to act against conscience nor be prevented from acting according to conscience, especially in religious matters. The reason is because the practice of religion of its very nature consists primarily of those voluntary and free internal acts by which human beings direct themselves to God. Acts of this kind cannot be commanded or forbidden by any merely human authority.

As medical providers we do our very best to provide care and medical advice according to our knowledge and conscience to ensure that the patient is receiving appropriate care.

As a Catholic physician I have a spiritual obligation as well as a legal right to offer and perform clinical services that do not violate my ethical, moral, personal, or religious convictions or beliefs—in short, my conscience. As a doctor the freedom to practice based not only on scientific knowledge but also on my faith and conscience allows me and all physicians and healthcare providers to offer the best quality of medicine possible. As a patient, I want my doctors, nurses and other healthcare providers to offer the same type of care. The moment we allow our conscience to be replaced by a government “conscience,” we begin to lose our freedom.