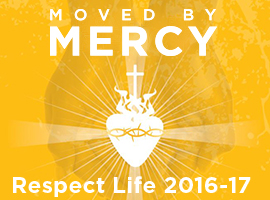 Order in either English or
Spanish!

Use in social media, print, or online!

Use customized
images and
pre-written text to
easily share
this article!

Use as a bulletin insert or handout!

With proper attribution, the text of the 2016-17 Respect Life Program materials may be reproduced in whole or in part without alteration or change.

Every Suicide is Tragic

Proponents of doctor-assisted suicide try to draw a sharp distinction between those with a mental illness who want to end their lives and those with a terminal illness who express the same wish. They even insist we should not call the latter "suicide," contrary to the plain meaning of the word. This is a tragically false distinction with far-reaching consequences.

Even among terminally ill patients, a request to die is nearly always a cry for help.1 This request is a distress signal indicating that something in the patient's condition—at the medical, psychological, or social level—has not been adequately attended to.

Studies show that the desire for death in terminally ill individuals generally correlates with both physical pain and poor social support. When comfort or relief is offered in the form of more adequate treatment for depression, better pain management, or more comprehensive palliative care, the desire for death typically vanishes. In the Netherlands, for example, the request for "hastened death" was withdrawn by 85% of patients when their symptoms were better controlled.2

Suicidal individuals—with or without a terminal illness—typically do not want to die; they want to escape what they perceive to be an intolerable situation, and they inaccurately believe that suicide is their only way out. The patient requesting assisted suicide is often asking, "Does anyone want me to be alive, or care enough to talk me out of this request and support me through this difficult time?"

Among terminally ill individuals, a request to die is often associated with a potentially treatable mental disorder such as depression or anxiety. Yet alarmingly, in Oregon, where assisted suicide has been legal since 1997, fewer than 5% of individuals who die by assisted suicide are ever referred for psychiatric or psychological evaluation to rule out the most common causes of suicidal thinking—and the percentage of those receiving such an evaluation is steadily decreasing.3

While individuals who are at risk for suicide often contemplate and formulate suicidal plans, and some may show warning signs, they are often ambivalent about ending their lives. The actual suicide attempt is often done impulsively, in the midst of an acute crisis or while intoxicated or emotionally distressed.

A journalist tracked down the few dozen individuals who survived jumping off the Golden Gate Bridge, which is the #1 suicide spot in the world.4 He asked them what was going through their minds in the four seconds between jumping off the bridge and hitting the water. Every one of them responded that they regretted the decision to jump. One man said, "I realized that all the problems in my life that I thought were unsolvable were actually solvable—except for having just jumped." To abandon individuals who have lost hope—under the guise of "respecting their autonomy"—is irresponsible.

Furthermore, completing a suicide generally requires not just intent (which typically waxes and wanes over time) but also easy access to means. People tend to fixate on one specific plan. If that particular method isn't readily available, they typically don't choose an alternative method; they choose to live.5 But assisted suicide increases access to a ready means to end one's life for those who are especially vulnerable due to a terminal illness.

Advocates of assisted suicide claim it is a private decision, an exercise in personal autonomy that does not affect others. But there is a well-studied "social contagion" aspect to the behavior that can't be ignored.

A recent study,6 which controlled for other factors that could account for the rise, showed that the permissive assisted suicide laws in Oregon and Washington have caused at least a 6% rise in overall suicide rates in those states. Additional data, although limited, enhances this distressing picture. After suicide rates had declined in Oregon in the 1990s, they rose dramatically there between 2000 and 2010—the years following the legalization of assisted suicide in 1997. By 2012, suicide rates in Oregon were 42% higher than the national average.7

We know that suicide is among the health-related behaviors that tend to spread from person to person. When a person ends his or her life, it can affect the choices of that person's friends, as well as the choices of people at least three degrees of separation away: the friends of his or her friends' friends.8 Additionally, publicized cases of suicide lead to clusters of copycat cases—known in social science as the Werther Effect. A 2003 Swiss study, for example, showed evidence of suicide contagion following media reports of doctor-assisted suicide.9 No one is an island.

Finally, the law itself is a teacher. Our laws shape cultural attitudes toward certain behaviors and influence social norms. Laws permitting assisted suicide communicate the message that, under especially difficult circumstances, some lives are not worth living. This tragically false message will be heard not only by those with a terminal illness, but by any person struggling with the temptation to end his or her life.

Every suicide is tragic. We don't discourage suicide by assisting suicide.