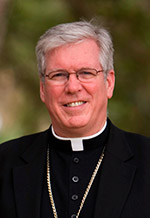 Earlier today, President Trump unveiled a budget plan that calls for a sharp increase in military and immigration enforcement spending and stark cuts across much of the rest of the government including the elimination of dozens of long-standing federal programs that assist the poor and most vulnerable among us.

President Trump's first budget proposal, named "A New Foundation for American Greatness," would increase defense spending by $54 billion and then offset that by stripping money from many agencies and programs that serve millions of people, including the poor.

The cuts could represent the widest swath of reductions in federal programs since the drawdown after World War II.  Bishop Frank Dewane of Venice, Florida, Chairman of the U.S. Conference of Catholic Bishops Committee on Domestic Justice and Human Development, emphasizes the moral imperatives involved in such decisions and expresses concerns about their impact on the nation's poor and vulnerable in the following Q & A:

Q: Why does the Catholic Church consider the budget a moral document?

A:   The budget is a moral document because it highlights the collective spending priorities of our nation, which impact the good of real people.  These decisions help determine how we all, particularly the most vulnerable, will fare in society.  As Christians, we also recall the words of Christ who said, "whatever you did for one of the least of these, you did for Me" (Matthew 25).  Budget decisions ought to be guided by the moral criteria that ensure protection of human life and dignity, give central importance to "the least of these," and promote the well-being of workers and families who struggle to live in dignity.  We cannot balance the budget on the backs of the poor.  The moral measure of the federal budget is how well it promotes the common good of all, especially the most vulnerable.

"We cannot balance the budget on the backs of the poor."

Q: What are some of your concerns with the proposed budget?

A:  The proposed sharp increases in defense and immigration enforcement spending, coupled with severe reductions to non-defense spending for the poor, is profoundly troubling.  Such spending reductions would have an impact on the vulnerable in every state. Crucial programs, such as the Supplemental Nutrition Assistance Program (SNAP), which provides critical nutrition assistance to hungry people, would suffer from deep cuts, and the Community Development Block Grant (CDBG) program, which gives states and cities more flexibility in how they combat poverty, could be eliminated.  When defense spending, which already exceeds that of the next eight nations combined, is receiving a large increase in funds, it is hard to reconcile the significant cuts that are being made to crucial services such as health care, nutrition, income security and anti-poverty programs.

Q: How does the federal budget impact the Catholic Church in America?

A:  The Catholic community defends the unborn and the undocumented, feeds the hungry, shelters the homeless, educates the young, and cares for the sick both at home and abroad.  We help mothers facing challenging situations of pregnancy, poor families striving to rise above crushing poverty, refugees fleeing conflict and persecution, and communities devastated by wars, natural disasters and famines. In much of this work, Catholics are partners with the government.  Combined resources allow our nation to reach further and help more. The human consequences of budget choices are clear to us as pastors, and it is important to be vocal when proposed funding cuts impact those whose voices are all too often missing from these debates. Therefore, the Catholic Bishops of the United States stand ready to work with leaders of both parties toward a federal budget that will not only reduce future deficits, but will also protect the poor and vulnerable while advancing peace and the common good of civil society.