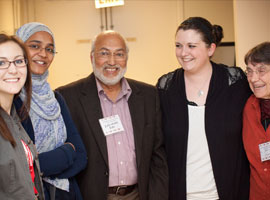 Delegates representing the Christian, Hindu, Jewish, Muslim and Sikh traditions convened on November 10, 2012 in Washington D.C. for 'Dialogue of Life': Celebrating our Commonalities, Understanding our Differences. To see a slideshow and read talks delivered at the inter-generational dialogue, check out our homepage for the event.

Beginning in 2012, the three regional dialogues would convene the National Muslim-Catholic Plenary, a format that eventually matured into a single national dialogue in May of 2015. This major development occurred with a unanimous vote of the plenary assembled at the Catholic University of America to commemorate the 50th anniversary of Nostra Aetate. While the three dialogues continue in their respective regions, the USCCB has shifted its sponsorship to the National Catholic-Muslim Dialogue (NCMD), which has been meeting annually since 2016.

Over the years, the dialogues have discussed issues related to theology as well as common pastoral and societal concerns. The wide variety of topics include discussions of revelation, poverty, sacred texts, extremism, marriage, and religious prejudice.

The current co-chairs of the NCMD are Shaykh Abdool Rahman Khan of Charlotte, NC and His Eminence Blase Cardinal Cupich, Archbishop of Chicago. Dr. Anthony Cirelli staffs this dialogue for the SEIA.

Documents and News Releases Produced by the Dialogue