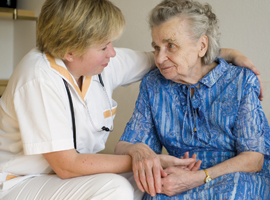 Suicide and Assisted Suicide: The Role of Depression

Many people assume that a large percentage of terminally ill patients come to a fixed and “rational” decision for suicide, to be taken at face value as an expression of their free choice. The reality is very different. “Mental illness raises the suicide risk even more than physical illness. Nearly 95 percent of those who kill themselves have been shown to have a diagnosable psychiatric illness in the months preceding suicide. The majority suffer from depression that can be treated. This is particularly true of those over fifty, who are more prone than younger victims to take their lives during the type of acute depressive episode that responds most effectively to treatment.
PDF Version

“Like other suicidal individuals, patients who desire an early death during a serious or terminal illness are usually suffering from a treatable depressive condition. Although pain and other factors such as lack of family support contribute to the wish for death, recent research has confirmed that none is as significant as the presence of depression, which researchers have found to be the only predictor of the desire for death.”


“The vast majority of cancer or AIDS patients, particularly those with advanced disease, who express suicidal ideation or request a hastened death do so while suffering with unrecognized and untreated psychiatric disturbances (depression, confusional states), and poorly controlled physical symptoms (pain)…

“Psychiatric disorders are frequently present in hospitalized cancer patients who are suicidal… Depression is a factor in 50% of all suicides. Those suffering from depression are at 25 times greater risk of suicide than the general population. The role depression plays in cancer suicide is equally significant… Among those with advanced illness and progressively impaired physical function, symptoms of severe depression rise to 77%. Hopelessness is a key variable that links depression and suicide in the general population. Furthermore, hopelessness is a significantly better predictor of completed suicide than is depression alone….

“Depression is as important a factor in AIDS-related suicide as it is in suicide in general. Marzuk et al. reported that 50% of AIDS patients who committed suicide were significantly depressed, and 40% saw a psychiatrist within four days of committing suicide. One-third of suicidal AIDS patients evaluated at Memorial Hospital were suffering from an undiagnosed major depression.”


In a study of advanced cancer patients receiving palliative care, “the current desire for a physician-hastened death was associated with a high prevalence of depressive disorders. This is significant in the present context because depression is a potentially treatable problem, which in severe cases may bias health decisions in a negative way…. It is noteworthy, however, that pain, although common at low levels in the majority of participants, did not differ significantly between [those who wanted a physician-hastened death and those who did not].”


“From the data related to patients who had actually expressed a desire for hastened death, it seems that psychosocial and existential factors seem to be more common than those directly related to physical symptoms, such as pain…. Given the fact that some patients who make a DTDS [desire to die statement] may have a major psychiatric condition, particularly depression, routine screening for psychological distress in palliative care patients is highly recommended.”


From a study in which 200 terminally ill inpatients were interviewed: “Although occasional wishes that death would come soon were common (reported by 44.5% of the patients), only 17 (8.5%) of these individuals acknowledged a serious and pervasive desire to die. The desire for death was correlated with ratings of pain and low family support but most significantly with measures of depression. The prevalence of diagnosed depressive syndromes was 58.8% among patients with a desire to die and 7.7% among patients without such a desire. Follow-up interviews were conducted with six patients; in four cases, the desire to die had decreased during the 2-week interval…. The desire for death in terminally ill patients is closely associated with clinical depression--a potentially treatable condition-- and can also decrease over time. Informed debate about euthanasia should recognize the importance of psychiatric considerations, as well as the inherent transience of many patients’ expressed desire to die.”


From a study of over 600 suicides among seniors aged 66 and over: “This large population-based study… is consistent with previous work that has identified significant associations between suicide in older individuals and medical or psychiatric diseases…. A concurrent psychiatric diagnosis is commonly associated with suicide, and our findings support this relationship. Both depression/psychosis and neurosis were associated with suicide outcome.”


“The prevalence of hopelessness or suicidal ideation in elderly people varies from 0.7-1.2% up to 17% in different studies, depending on the strictness of criteria used. A universal finding is the strong association with psychiatric illness, particularly depression. The prevalence of suicidal feelings in mentally healthy elderly people has been reported to be as low as 4%. These findings are therefore contrary to the ageist assumption that hopelessness and suicidality are natural and understandable consequences of the ageing process….[T]he fact that there is a high prevalence of potentially treatable psychiatric illness in those elderly people who have both physical illness and suicidal ideation should be central in any discussion of physician-assisted suicide.”