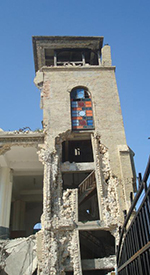 To date, the Subcommittee for the Church in Latin America (SCLA) of the USCCB has approved over 10 million USD in grants to 15 reconstruction projects.

Check out the Global Issues - Haiti page for more information on Haiti.

After the terrible tragedy of the January 2010 earthquake that devastated Haiti and buried almost 300,000 souls beneath badly built houses and buildings, Cardinal George and Cardinal Dolan requested that all dioceses take up a Special Collection for Haiti Relief on the weekend after the quake for humanitarian aid and to rebuild church structures. Catholics across the country responded with tremendous generosity.

In April, 2011 Proche (the construction unit in Haiti) published the first version of its construction project submission form and distributed it to Haitian dioceses, parishes, and congregations for their use. The form, in French, collected basic information that was used to approve and prioritize projects for study and execution. Proche is now funding and working on over 40 projects in Haiti. View the most recent full audited financial statements of Proche.

Four years after the earthquake, reconstruction of the church in Haiti is going strong. The construction unit of the Partnership for Church Reconstruction (Proche) supervises all projects.There are currently a total of nearly 40 projects in various stages of completion. Read the most recent report (2013) on the progress made in Haiti.

Office of International Justice and Peace Resources on Haiti

One Table Many Partners Haiti Conference. . .

One year after the earthquake

Letter on the long-term recovery and development of Haiti

Letter in support of Extension of Haiti Trade Preferences - S 2978

Letter in support of the House version of the "Haiti Empowerment, Assistance, and Rebuilding Act"

Letter in support of the "Haiti Empowerment, Assistance, and Rebuilding Act"

The big picture about Haiti