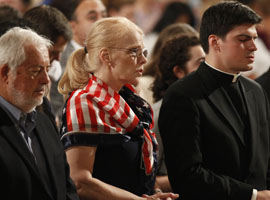 "Whether people are serving the poor elderly, like the Little Sisters of the Poor, or running a family business, like the Greens, the government should recognize that human dignity by allowing people to  live out their faith absent a very strong reason...The Religious Freedom Restoration Act (RFRA) guarantees this protection. Thank God for RFRA."
- Archbishop Joseph Kurtz, Archbishop of Louisville, KY, USCCB President

On Monday, June 30, 2014, the Supreme Court handed down a decision in favor of Hobby Lobby and its owners, upholding the rights of Americans to live out their faith in daily life, through the closely held businesses they run. The court based its decision on the Religious Freedom Restoration Act (RFRA), which Congress passed in 1993 with nearly unanimous bipartisan support and which was signed into law by President Bill Clinton.

The USCCB welcomes the Supreme Court's decision to recognize that Americans can continue to follow their faith when they run a family business. Justice has indeed prevailed, with the Court respecting the rights of the Green and Hahn families to continue to abide by their faith in how they seek their livelihood, without facing devastating fines.

Importantly, the Supreme Court upheld the Religious Freedom Restoration Act: RFRA serves the common good in countless ways by maximizing religious diversity and the flourishing of civil society. In the words of USCCB President Archbishop Joseph Kurtz, there is a "vital layer of voluntary associations between individual and government, which provide for so many of our needs, and so enrich our lives." Thus, RFRA's legal protections allow many faith-based community organizations to provide critical services to the most vulnerable members of society.

The Little Sisters of the Poor

On May 16, 2016, the U.S. Supreme Court issued a per curiam opinion in the case of Zubik v. Burwell, in which Catholic and other religious organizations, such as the Little Sisters of the Poor, are challenging the HHS mandate requiring them to facilitate health insurance coverage of sterilization, contraception, and drugs and devices that may cause abortions.

The Court unanimously vacated the decisions before it, remanding the cases to the lower courts with instructions to afford the parties the opportunity to work out an alternative approach to the mandate. In the meantime, the Court forbade the government from imposing taxes or penalties on the organizations for failure to provide the required "notice" and "certification" or otherwise to trigger the "accommodation."

In response to the Court's request that parties work out an alternative, the U.S. Department of Health and Human Services (HHS) requested information on how best to accommodate stakeholders with religious objections to such coverage, while assuring that people with no religious objection can still obtain it.  Answering this request, on September 9, 2016, the U.S. Conference of Catholic Bishops filed comments with HHS objecting to mandated involvement in coverage of abortifacients, contraceptives, and sterilization, on pain of crushing fines.

On June 1, 2017, Archbishop William E. Lori of Baltimore, Chairman of the U.S. Bishops' Ad Hoc Committee for Religious Liberty, issued an initial response to draft interim final regulations that had recently been leaked, saying: "Relief like this is years overdue and would be most welcomed.  ...[Ou]r goal will remain to protect both the conscience of individuals and our mission of sharing the Gospel and serving the poor and vulnerable through our ministries."

Looking ahead, we must redouble our efforts to build a culture that respects religious freedom. We ask for continued protection of RFRA and other laws that protect religious freedom. We also ask for continued prayers for the protection of religious liberty. The Supreme Court has not yet ruled on whether the so-called "accommodation" violates RFRA when applied to charities, hospitals, schools, or other religious non-profit entities, many of which have challenged the accommodation as a burden on their religious exercise.

It is a blessing and privilege to have numerous ministries of service to the poor and the hungry, the sick and the dying.  We continue to hope that these great ministries of service, like the Little Sisters of the Poor and so many others, will prevail in their cases as well.

Check out the action alert and contact Congress to include conscience provisions!