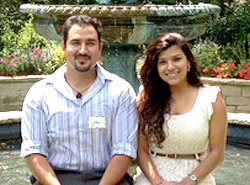 WASHINGTON—Two young adult Catholics who are brother and sister advocates for worker justice and immigrants’ rights are the recipients of the 2013 Cardinal Bernardin New Leadership Award. Driven by their faith and their own experiences as immigrants, Jose Luis and Ana Claudia Aguayo work to empower low-income workers through the Northwest Arkansas Workers’ Justice Center, in Springdale, Arkansas.

The Aguayos will receive the award at a reception during the annual fall General Assembly of the U.S. Conference of Catholic Bishops in Baltimore, November 11. The Cardinal Bernardin Award is sponsored by the Catholic Campaign for Human Development (CCHD), the domestic anti-poverty program of the U.S. bishops.

“Jose and Ana embody the social virtues needed in both the Church and society to promote human dignity and lift families out of poverty,” said Bishop Jaime Soto of Sacramento, California, chairman of CCHD. “Their work with immigrants and the working poor expresses the gospel solidarity exemplified by Cardinal Bernardin and now Pope Francis. Their work contributes to building a ‘culture of encounter’ of which Pope Francis spoke, to counteract the prevailing ‘culture of exclusion.’”

The Aguayos were born in Guadalajara, Mexico and immigrated to the United States from Mexico in 1997 with their parents and six other siblings. Jose Luis Aguayo, 27, is executive director for the Northwest Arkansas Workers Justice Center. He has participated in panels discussing workers’ rights, immigration reform, and the necessity of the DREAM act. He cites his parents and his community as sources of inspiration for his work.

Ana Claudia Aguayo, 24, serves as the director of development and communications for the Northwest Arkansas Workers’ Justice Center. Her work is inspired by her Catholic faith and her experiences, as a young person, interpreting for family members and witnessing the effects of immigration, discrimination and wage theft within her family.

Ana and her brother joined the Northwest Arkansas Workers’ Justice Center in 2008 as volunteer worker advocates, offering interpretation in a case involving 12 Latino construction workers who were fighting against wage theft. The Aguayos soon took over running the center while both completed their studies at the University of Arkansas. They have helped to recover over $580,000 in lost wages. Their efforts led to establishing stronger standards for over 800 poultry processing employees. They were nominated for the Bernardin Award by Tom Navin, CCHD director for the Diocese of Little Rock, Arkansas.

The Cardinal Bernardin New Leadership Award honors a Catholic between the age of 18 and 35 (40, starting in 2014) who demonstrates leadership in fighting poverty and injustice in the United States through community-based solutions. It is named for the late Cardinal Joseph Bernardin, who served as archbishop of Chicago from 1982 till his death in 1996. He served as the first general secretary of the U.S. bishops from 1968-1972 and as third president of the U.S. bishops, from 1974-1977. More information is available online: www.usccb.org/about/catholic-campaign-for-human-development/cardinal-bernardin-new-leadership-award.cfm
---
Keywords: Cardinal Bernardin New Leadership Award, Jose Luis Aguayo, Ana Claudia Aguayo, Catholic Campaign for Human Development, CCHD, Bishop Jaime Soto, U.S. Conference of Catholic Bishops, USCCB, General Assembly, Baltimore, Pope Francis
# # # # #