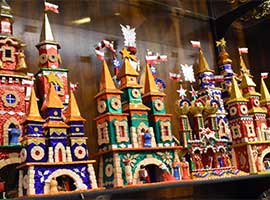 In both English and Spanish

♦ On this feast of St. Andrew the Apostle, contemplate the "great call of Apostleship.”

♦ In the synoptic Gospels, Andrew is a Galilean fisherman grouped with his brother, Peter, and with James and John in the inner circle of Apostles; in John's Gospel, he is the disciple of John the Baptist who is the first to follow Jesus and who brings his brother to the Lord. Many traditions about Andrew come from the apocryphal second-century Acts of Andrew, which depicts him as a zealous missionary in the Black Sea region who is crucified—tied to an x-shaped cross—by the Roman governor. Some early church historians also said he evangelized in Greece and Asia Minor. He is the patron saint of Scotland, Russia, Greece, and those who fish for a living.
---Catholic News Service
©2020 United States Conference of Catholic Bishops
National Collections
National Religious Retirement Office
New American Bible
Pro-life Activities
Public Affairs
Religious Liberty
Resettlement Services
World Youth Day