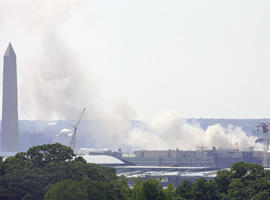 Classes have been cancelled for the rest of the day. We have had the TV on in the apartment since we got home, and - to this point – I am still not able to fully grasp the breadth of this. I have to go to the bathroom and I'm starving, but all I can do is stare at the TV.

An airplane just crashed somewhere in Pittsburgh. My roommate Sadrina was near hysterics because her mother lives there. She just called and found out she's ok, but phone lines are tied up making it difficult for loved ones to contact each other.

I called Dad at home in Alexandria, Virginia. He said he heard a small "pop" like a backfire, then police cars went screaming through the neighborhood towards DC. Next he heard a really loud 'bang' like a sonic boom that rattled all the windows in the house – fighter jets most likely.

I'm afraid for Tim. His mom works at the Pentagon, but he doesn't know which wing. The South wing was hit. No casualties have been reported yet.

The television in our apartment has not been turned off for 12 hours. The coverage mostly repeats itself. Around 10 hours into the coverage we began flipping through the channels to see how many times CNN, NBC, CBS, or ABC popped up. Each station has its own unique title like "Attack on America," "America under Attack," and "Terror in America".

Tina's boyfriend, Dave, is in the Army reserves. He got a call today to be on standby. I saw him earlier today and he looked like he was in shock, just kind of wandering around campus. Tina's pretty freaked out too. She said she has had a nightmare with planes in it the past two nights. Yesterday, for no particular occasion, Dave gave her a silver, heart-shaped necklace with diamonds running down one side. She said she'd been clutching it all day long. I would be too.

Tim's mom is ok. We're still not sure how many people died at the Pentagon.September 12, 2001

They think that an Arabian terrorist group is responsible for these attacks. They've found flight manuals written in Arabic in cars belonging to the suspected hijackers. They've also found people who unwittingly trained them to fly; who say they seemed to have a lot of funds. Lots of other witnesses and facts all point to this same terrorist group. If it turns out to be this guy and his cohorts then we will most likely declare war on him and Afghanistan (they country he is staying in). America is gearing up for war and it is unnerving. It's almost incomprehensible. My generation has never been through a serious military conflict. The Gulf War was so far away and over so quickly. This is so…close.

Volunteers have come from everywhere and are working around the clock; Grabbing sleep, food, and water when they must and chomping at the bit to get back in to the wreckage to find survivors. God bless them.

Two more buildings have collapsed as a result of the towers falling; World Trade Towers #3 and #7. A couple of other buildings are threatening to collapse which sometimes pauses rescue efforts. It's all very frustrating.

I thanked God for cell phones today. Apparently several people on the planes that crashed were able to call loved ones on cell phones and say goodbye. They also have given us bits of information which can help us get a better picture of what happened on these planes. Also, people trapped in the rubble from the collapsed towers were able to call 911 and in that way rescuers are able to locate survivors and bring them to safety. Unfortunately, many callers can still not be reached and by the time they can be, there may not be anyone on the other end of the line anymore. It's so frustrating.

Ten years later I have a family of my own and two young children. Every year when September 11 rolls around I wonder, what will I tell them about this day? When will they be old enough to hear about it? Will they be scared? Or worse, will it not affect them at all?

The week of September 11, 2001, I prayed all day for the strength of those onsite participating in the rescue efforts. For the rest of that year I prayed every day for the victims that survived and for those that didn't. Now, ten years later, whenever the clock clicks over to 9:11, I stop and say a little prayer for the families of the victims. I can't not pray for them. They carry the weight of this day everyday in a way that I won't ever be able to fully appreciate. I will pray for them for the rest of my life and thank God that it was not my mother on the plane, or my father in the Pentagon, or my sister visiting New York. Acknowledging this tragedy twice a day is infinitely easier than living without any of them.

Days after September 11, classes started back up. Weeks later, radio stations began playing music again. Months later, media coverage began to include local news once more. Years later, the American public didn't even want to hear the word "terror" anymore. It's funny how life goes on, even with a hole in your heart.

Meg C. DeBoe is a resident of Annandale, Virginia.