The events of 9/11 changed my life and my priesthood. A decade has gone by since that "day of infamy" of the new 21st Century, but I can remember with clarity the events of September 11, 2001. It has made me who I am today. 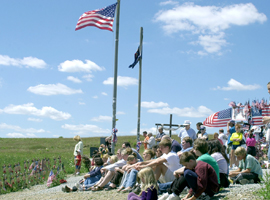 I was preparing for Mass when I heard on the news that a plane had crashed into the World Trade Center. I celebrated Mass. After Mass, I headed out to lower Manhattan along the Gowanus Expressway where I saw the smoke and dust of the already collapsed buildings.

After reporting in with the mayor and police commissioner, I went to Ground Zero, where I saw the carnage for the first time. I was confronted with the sight of the dead and the knowledge that many of the officers I knew through my ministry as a police chaplain were missing and feared dead. One of the missing was a friend whose infant son I had baptized only 10 days earlier.

In the months after 9/11 I spent almost every day at the site. For the first several weeks, I celebrated Mass every day for the families who were waiting word about their loved ones. After hopes of rescuing survivors vanished, the project moved toward recovery. Masses continued every Sunday and holy day for the emergency service cops who worked to bring closure for the families by returning their loved ones for burial.

Attendance at those weekly Masses grew every week, starting at about fifteen on the first Sunday after September 11. By May, when the last piece of metal was removed from Ground Zero, the intersection at Murray and Greenwich Streets was closed so that I could celebrate Mass for several hundred people. It was something I never thought would happen, but I will treasure its memory for all my life.

The years have gone by, but the memories remain for all who were involved in that one single day and its aftermath that changed the lives of so many and of our nation. I, along with my fellow police chaplains, have continued to minister to the 23 families of the cops we lost that day and to the over 40 other families who have lost their loved ones due to "post 9/11" illnesses. It's tragic that the evil of that September day continues to take lives and destroys families.

There really has been no closure for the thousands of families who lost loved ones and the millions of Americans whose safety was violated. While Osama Bin Laden has been killed, the threat of another attack is always there. Those who say we should put September 11 behind us fail to realize that it is not only a part of history but a part of our lives. Time does not heal the wounds; we just learn to live with them.

As a priest and police chaplain my job is to minister to those who are hurting. In these past ten years I have felt the love of those who have accepted me as a part of their families and have ministered to me. God was there that day in the heroes who performed.