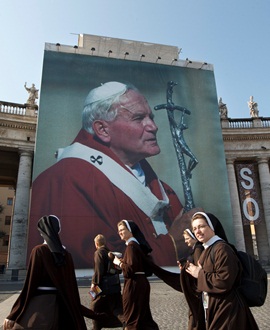 A group of nuns walks by a huge image of John Paul II displayed in St. Peter's Square at his beatification ceremony on May 1, 2011. CNS Photo/Paul Haring.

The Life and Ministry of Saint John Paul II

Karol Wojtyla, the future Pope John Paul II, lived an unusually varied life before his priestly ordination. As a teen, he split stone at a quarry, wrote poetry and supported a network that smuggled Jews to safety during the German occupation of Poland.

As a young priest, he was a favorite with students at Lublin University who flocked to his classes and joined him on camping, hiking and canoeing trips. As the second-youngest cardinal ever named by the Vatican, he ran an informal office and celebrated holidays with Krakow actors.

It should have been no surprise that he would redefine the traditional role and demeanor of the papacy by traveling extensively, continuing to enjoy outdoor activities and taking on a wide range of political and moral issues.

As a high school student in his hometown of Wadowice, in southern Poland, Wojtyla impressed classmates by the intense way he would pray in church, a habit of deep meditation that remained with him for life

"Even as a boy he was exceptional," said Rafat Tatka, a neighbor who knew the young boy as Lolek, a nickname that translates as Chuck.

The Nazi takeover of Poland in September 1939 meant an official end to all religious training and cultural activities, but Wojtyla attended an underground university in Krakow and helped set up a clandestine theater group that performed in stores and homes. In addition to the quarry, he worked in a chemical factory -- experiences that provided material for his poetry and papal writings on labor.

He participated in daily Mass, spiritual exercises, Marian devotion and Bible study. Friends said that when his father died in 1941, Karol knelt for 12 hours in prayer at his father's bedside.

Soon after, he withdrew from the theatrical group and began studying for the priesthood, a decision that surprised many of his friends, who tried to convince him his talent lay in the theater. He studied in a clandestine seminary operated in Cardinal Adam Sapieha's Krakow residence in defiance of Nazi orders forbidding religious education.

The archbishop saw him as a future church leader. Yet the young man who wrote poems and a doctoral dissertation on the mysticism of St. John of the Cross was attracted to monastic contemplation. Twice during these years he tried to join the Discalced Carmelites but was turned away with the advice: "You are destined for greater things."

He was ordained Nov. 1, 1946, just as the communist regime replaced the Germans at the end of the war.