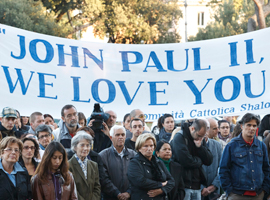 Over the last several years of his pontificate, Pope John Paul II revealed an aspect of his personal life that he did not want history to overlook. In autobiographical books and in selected talks, the pontiff emphasized that what kept him going was not the power of the papacy but the spiritual strength that flowed from his priestly vocation.

"With the passing of time, the most important and beautiful thing for me is that I have been a priest for more than 50 years, because every day I can celebrate Holy Mass!" he told some 300,000 young people in Italy in 1997.

While many writers have recounted the pope's early life as a semi-political pilgrimage under Nazi occupation and communist domination in Poland, the pope himself remembered those years as a crucial time of spiritual formation. In his 1996 book, "A Gift and Mystery," he recalled how the sense of being called to the priesthood filled him with joy, but it also cut him off from acquaintances and other interests. In one of the most moving passages he ever wrote as pope, he said he still feels a debt to friends who suffered "on the great altar of history" during World War II, while he studied in a clandestine seminary.

The solemn, prayerful pomp of the ceremonial transfer of the pope's body from the Apostolic Palace to St. Peter's Basilica on April 4 was replaced by informality and expressions of simple piety as the public lined up to view the pope's body. Hundreds of police officers from the Vatican, Italy and every imaginable branch of the Italian military, as well as Red Cross workers and civil protection volunteers, patrolled the area, keeping order, handing out water and helping those who tired of waiting in line for hours.

While a few people gave up, most seemed content to wait, chatting with friends, reminiscing about the pope, praying the rosary or talking on their mobile phones.

Rocco Conserva, 58, of Rome was in line at 3 p.m. even though Italian television and radio stations already were reporting the basilica would not open until after 8 p.m., rather than 6 p.m. as originally announced. He said he would wait "as long as it takes" to see Pope John Paul.

"I have seen five popes in my lifetime," Conserva said. "I loved Pope John XXIII very much. He was the good pope. But this pope was universal so he was my pope ... he belonged to all of us."

Pope John Paul II was beatified in 2011 by Pope Benedict VXI and made a saint in 2014 by Pope Francis.