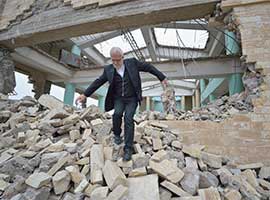 "Great concern arises from the condition of life faced by Christians who in many parts of the Middle East suffer gravely as a consequence of the current tensions and conflicts underway….We must not resign ourselves to thinking of a Middle East without Christians, who for 2,000 years have confessed the name of Jesus, and have been fully integrated as citizens into the social, cultural and religious life of the nations to which they belong."

Statements from the USCCB

Statement of the Co-ordination of Bishops' Conferences in Support of the Church in the Holy Land
Bishop Oscar Cantú, January 18, 2017

Letter to Congress Regarding Genocide Resolution and Assistance for Survivors of Genocide
Bishop Oscar Cantú, September 21, 2016

Expressed his joy made by their hope and thanked them for their witness, likening their presence to "leaven to the dough."

Encouraged continuation of ecumenical and interreligious dialogue, calling for them to be "artisans of peace, reconciliation and development, to promote dialogue, to build bridges in the spirit of the beatitudes, and to proclaim the Gospel of peace, in a spirit of ready cooperation with all national and international authorities"

Urged the international community to address the needs of minorities "above all by promoting peace through negotiation and diplomacy, for the sake of stemming and stopping as soon as possible the violence which has already caused so much harm."

The Church also engages in ecumenical efforts to protect/preserve/bring awareness to/ the Church in the Middle East. In 2015, Pope Francis addressed the Synod of the Chaldean Church and in February 2016, Pope Francis and Russian Orthodox Patriarch Kirill met in Cuba to issue a joint declaration calling on the international community to act urgently in the Middle East and noting the shared suffering of Christians in the ME.

In December 2016 on the feast of St. Stephen, the first Christian martyr, Pope Francis reflected on the continued witness and persecution of the Church, particularly in the Middle East.  He stated that "the martyrs of today are greater in number than those of the first centuries," and they exemplify fidelity to the gospel and witness to charity in truth. His words echo a homily given in 2014 at a Mass commemorating Roman martyrs under Nero's persecution:

"There are many martyrs today, in the Church, many persecuted Christians. Think of the Middle East where Christians must flee persecution, where Christians are killed. Even those Christians who are forced away in an 'elegant' way, with 'white gloves': that too is persecution. There are more witnesses, more martyrs in the Church today than there were in the first centuries….Let us think also to our brothers who are persecuted, who suffer and who, with their blood are nurturing the seed of so many little Churches that are born. Let us pray for them and for us".

In October 2010 the Synod of Bishops, at the request of Pope Benedict XVI, convened in a Special Assembly for the Middle East of the Synod of Bishops in order to "to confirm and strengthen the members of the Catholic Church in their Christian identity, through the Word of God and the sacraments," and "to foster ecclesial communion among the Churches sui iuris, so that they can bear witness to the Christian life in an authentic, joyous and winsome manner."


In this Special Assembly in October of 2010, the Synod of Bishops utilized its Instrumentum Laboris, the working document based on responses to the Lineamenta, the initial guidelines set forth by the Holy Father in preparation for the Synod. Forty-four propositions were presented and a concluding message was issued on October 24, 2010.

Does the Church engage in ecumenical and interreligious dialogue

Christians of the Middle East Backgrounder