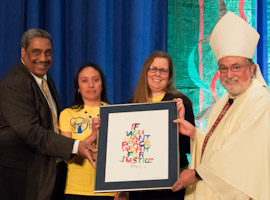 USCCB  >  About Us  >  Catholic Campaign for Human Development  >  Poverty Education

The Sr. Margaret Cafferty Development of People Award, an activity of the Catholic Campaign for Human Development (CCHD), is presented annually to an individual or group whose work demonstrates an outstanding witness to gospel values and action on behalf of justice.

A Presentation Sister, Sr. Cafferty served as executive director of the Leadership Conference of Women Religious and was a longtime member of the CCHD subcommittee.

The award was established in 1987 and was called the Development of People Award until 1997, when it was renamed in Sister Margaret Cafferty's honor after her death.

Nominations may be submitted by a CCHD Diocesan Director, lay or religious parish staff, a CCHD-funded organization, university faculty or staff, a mentor, or a colleague.

National CCHD staff will seek endorsement by the local Catholic bishop prior to selecting recipient. One award recipient will be chosen and notified by January.

In 2018, CCHD will honor the recipient during a plenary event at the Catholic Social Ministry Gathering in Washington, D.C. on Saturday, February 3. CCHD will cover the recipient's travel and one overnight stay.

Specific questions can be addressed to Maura Moser at mmoser@usccb.org.