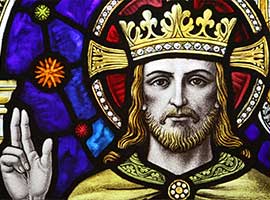 “¡Viva, Cristo Rey!” was the resounding battle cry of the Cristeros in their struggle against the violent imposition of a secularist, anti-Catholic, anti-clerical state in Mexico during La Cristiada (1926-1929), a war described by Graham Greene as “the fiercest persecution of religion anywhere since the reign of Elizabeth.”

“¡Viva Cristo Rey!” was also the final confession on the lips of Blessed Miguel Agustín Pro, a martyr of the Cristeros war. He was not a resistance fighter but a Catholic priest of wit and courage who selflessly ran a clandestine ministry during the treacherous reign of President Plutarco Calles. In 1927, Father Miguel was falsely charged and sentenced to death without due trial for the attempted assassination of Mexico’s former president, President Álvaro Obregón. The photographs of his execution were ordered by President Calles and were intended to show the cowardly death of a Catholic priest. Ironically, what has been seared into our collective historical memory is the very opposite of what Calles intended. The photographs immortalize an otherworldly truth.

Both literally and figuratively, Father Miguel’s life and death take the form of the cross. With arms outstretched in cruciform, rosary in one hand and a crucifix in the other, facing the firing squad with fierce and fearless serenity, Miguel Pro defied every worldly power. It is said that he cried out in a clear and steady voice, “¡Viva Cristo Rey!” just as the bullets riddled his body.

As with the Cristeros war, our fight to protect religious freedom today is a fight for the right to live and love, to serve and worship the one true God. Like Bl. Miguel Pro, we too seek to testify to the truth of the kingship of Jesus Christ in all of life. When we confess with our lips and know in our hearts that Christ is Lord and King, we come to experience the “glorious freedom of the children of God” (Rm 8:21) just as Blessed Miguel Pro and the cloud of witnesses who have gone before us experienced.

This year’s Solemnity of Christ the King occurs one day after the 92nd anniversary of the martyrdom of Blessed Miguel Agustín Pro. May this Solemnity of the King of kings and Lord of lords as well as its prelude in the anniversary of Blessed Miguel Pro’s death remind us of the true King who stoops to wash our feet, who turns the other cheek, who reigns from the cross with a mighty scepter of love, and who wields the powers of mercy and forgiveness and lays down his life for love of us. His kingdom is not of this world (Jn 18:36) but of the next. May we always keep that at the forefront of our minds. “¡Viva, Cristo Rey!”

Sr. Theresa Marie Chau Nguyen, O.P., Ph.D. is an Assistant Professor of Theology at the University of St. Thomas in Houston and a Dominican Sister of Mary Immaculate Province.

Return to Christ the King Reflections