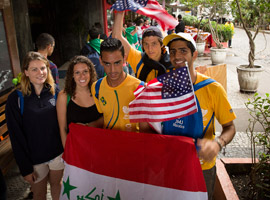 How to Talk about Religious Liberty

Religious freedom has recently become one of the major focal points in the conversation on how Americans can pro-mote the common good. Our Catholic tradition has much to offer this conversation. In this time of increasing polarization in our culture, we can contribute to a better understanding of this issue in a way that respects all people. We can speak with friends and neighbors about religious freedom and work to clear up misconceptions about it.

Many religious freedom skeptics have plausible concerns. For example, they are concerned that all people should be treated with equal dignity. Indeed, the dignity of all people is the foundation for Catholic teaching on religious liberty. It is important that we not dismiss skeptics, but rather, that we listen to their concerns and take them seriously.

So, if the skeptics have a point, what do we say?

Religious freedom is a fundamental right. It means that the government cannot coerce people into acting against their consciences. This is important for all people, not just people of faith. A government that makes one group choose obedience to the state over obedience to faith and conscience can force any group to submit to the state's demands. Religious freedom protects everyone.

People of faith need religious freedom to have the space to serve others. Oftentimes, religious liberty disputes arise when religious organizations are expected to sacrifice aspects of their faith in order to continue to serve the surrounding community. But it is our faith that in-spires us to serve. Take the Little Sisters of the Poor, who live out their Christian faith by serving the elderly poor.

These women have had to seek protection from a regulation requiring them to facilitate access to contraceptives, including abortion-inducing drugs and devices. Or, consider adoption services run by Catholic Charities, which simply seek to place children in homes with a married mother and father. Due to the redefinition of marriage in civil law, many Catholic Charities and other faith-based adoption agencies around the country have been forced to end their adoption and foster care services.

Challenges to religious freedom often come from a mistaken view of religion, a view that sees religion as good only if it conforms to every value that happens to prevail today.

However, the good that religious institutions do is inseparable from the parts that challenge prevailing norms. Religious convictions hang together, in and out of season. When faith groups violate their consciences, they undermine the whole mission of their ministry. People of faith and faith-based organizations need space to make their unique contributions to the common good.

Skeptics are often concerned about the effects that religious organizations have on people who do not share those religious beliefs. Skeptics tend to see a conflict between religious freedom and their vision of equality and choose a mistaken concept of equality over freedom. These are certainly difficult issues. Here are points to consider:

When we engage in conversation as Catholics, people want to know what we think. It's good to represent the Church and the beauty of her teachings; it's even better when we internalize those teachings and reflect on our own experiences and reasons for caring about religious freedom. Your friends and neighbors want to know what you think. You have a unique contribution to make to the conversation!