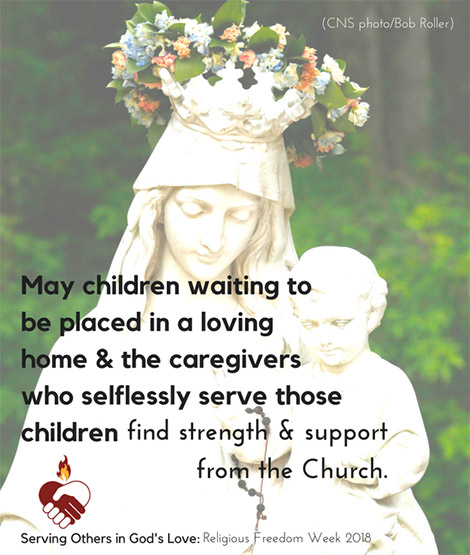 Video
Pray
May children waiting to be placed in a loving home,
and the caregivers who selflessly serve those children;
find strength & support from the Church.


Reflect
The opioid crisis is putting a strain on the foster care system.  Yet while more children are waiting to be placed in families, faith-based child welfare providers are being targeted for closures because of their religious convictions.  Catholic Charities in Illinois provided these services.  They excelled at recruiting families to serve as foster parents because they could go directly into churches and invite Catholics to serve in this way.  The number of children in need is going up.  The number of families willing to take the children into their homes is going down.  And in places like Illinois, Massachusetts, California, and D.C., the service providers who have a track record of excellence in recruiting and assisting foster families are being shut down. Intolerance for religious views has real consequences, and in this case, it is vulnerable children who have suffered.  Let's pray and act to keep kids first.


Act
The federal Child Welfare Provider Inclusion Act (H.R. 1881 / S. 811) would protect the religious liberty of child welfare service providers, including adoption and foster care agencies.  Similar legislation has been introduced and passed in several states.  Contact your U.S. senators and representatives and ask them to cosponsor the federal Child Welfare Provider Inclusion Act.  Check out the USCCB Action Alert Center and your state Catholic conference or diocesan website for legislative updates!