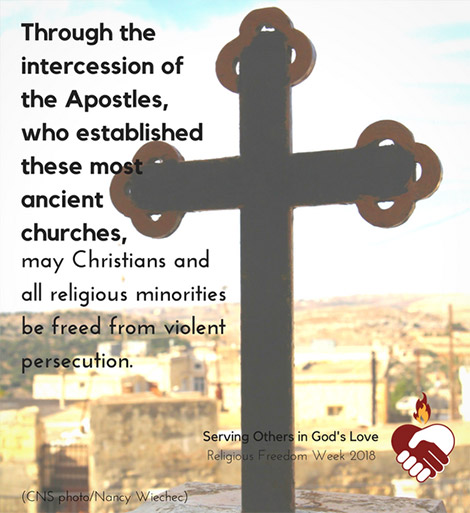 Pray
For our sisters and brothers in the Middle East:
through the intercession of the Apostles,
who established these most ancient churches,
may Christians and all religious minorities would be freed from violent persecution.


Reflect
In July 2015, Pope Francis said, "Today we are dismayed to see how in the Middle East and elsewhere in the world many of our brothers and sisters are persecuted, tortured and killed for their faith in Jesus….  [I]n this third world war, waged piecemeal, which we are now experiencing, a form of genocide – I insist on the word – is taking place, and it must end."  Today, Christians are among those religious minorities confronted with persecution, despite their having been critical to the vitality and pluralism of the region since the earliest days of Christianity.


Act
The Church in the United States stands in solidarity with Christians in the Middle East. Consider joining efforts to support Middle East Christians with a donation to the Knights of Columbus, Aid to the Church in Need, Catholic Relief Services, or Catholic Near East Welfare Association.