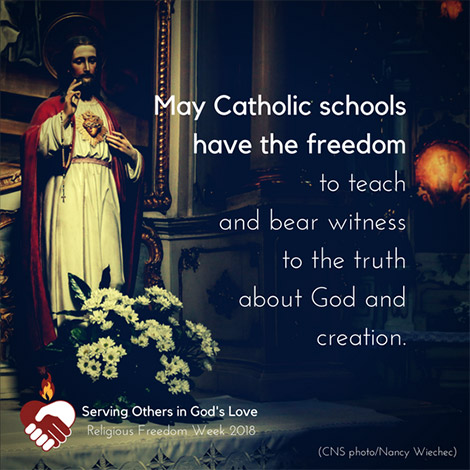 Pray
May Catholic schools have the freedom to teach and bear witness to the truth about God and creation.

Reflect
Education is a central aspect of the Church’s mission.  One of the Spiritual Works of Mercy is to teach.  In the U.S., Catholic schools have played an important role in offering hope in impoverished, primarily urban, areas.  Catholic schools have been significant anchor institutions in many neighborhoods, and thus they benefit even those who are not their students.  Catholic leaders played a leading role in ensuring that African-American children could have access to quality education.  Education is what Catholics do, and it is difficult to imagine an America without Catholic schools.  Catholic schools need the space - the freedom - to operate in accordance with Catholic convictions if they are to continue to be a source of vitality for our society.


Act
Schools that operate in accordance with Church teaching about marriage as the life-long union between one man and one woman face significant pressure to change their policies.  When Solicitor General Donald Verrilli argued before the Supreme Court in favor of marriage redefinition, he acknowledged that religious institutions, including schools, could lose their tax-exempt status. The First Amendment Defense Act (FADA) is a direct response to this threat.  FADA would protect the tax-exempt status of non-profit entities, including schools.  Urge Congress to support FADA today!