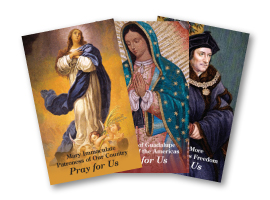 Images of Mary Immaculate, Our Lady of Guadalupe and St. Thomas More are featured on religious liberty prayer cards.

Resources at Your Fingertips

The bishops have called the faithful to Get Informed, Advocate and Pray for Conscience Rights. Join in solidarity to protect the conscience rights of all.