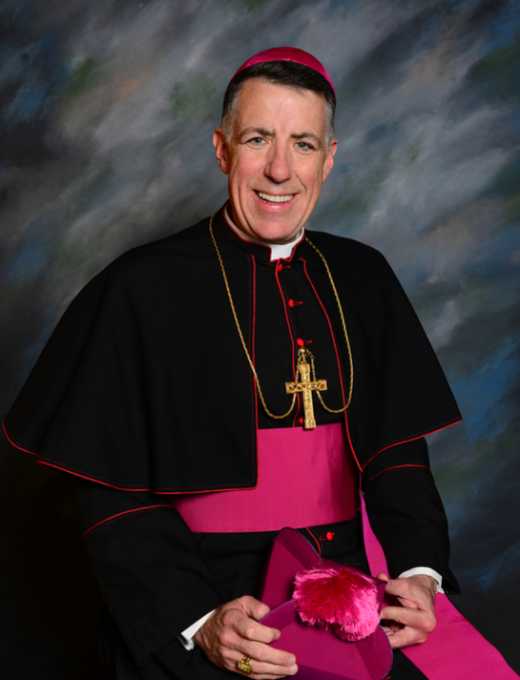 The Most Rev. James F. Checchio was named the Bishop of the Diocese of Metuchen by Pope Francis on March 8, 2016. He was ordained and installed as the Fifth Bishop of Metuchen on
May 3, 2016.

Bishop Checchio was born in Camden April 21, 1966, one of four children of James and Helen Checchio. He was raised in Collingswood, where he attended St. John School, and went on to Pope Paul VI High School in Haddon Township.

Before being named Bishop of the Diocese of Metuchen, he served as rector of the Pontifical North American College in Rome from January 2006 to January 2016, after serving as vice rector there for two and a half years.  During his years as rector, the College enjoyed its highest enrollment of seminarians from the United States since the 1960's.

Prior to that, he held various roles in the Diocese of Camden. Bishop Checchio served as secretary to Bishop James T. McHugh, vice chancellor, director of communications, moderator of the curia, and episcopal vicar for administration of the diocese. He also served in the Tribunal and as a member of the College of Consultors, Presbyteral Council, Investment Committee and Diocesan Finance Council.

Bishop Checchio was appointed a Chaplain to His Holiness by Pope John Paul II in 2000, granting him the title of monsignor; and, was appointed a Prelate of Honor by Pope Benedict XVI in 2011, a papal honor bestowed on diocesan priests.

Bishop Checchio received a Bachelor of Arts Degree in Philosophy from the University of Scranton, Pennsylvania. He studied at North American College, Rome, and was ordained a priest for the Diocese of Camden, N.J. on June 20, 1992 at the Cathedral of the Immaculate Conception, Camden.

He holds a Masters of Business Administration Degree from LaSalle University, Philadelphia; and Doctorate of Canon Law and Bachelor of Sacred Theology degrees from University of Saint Thomas Aquinas, Rome.