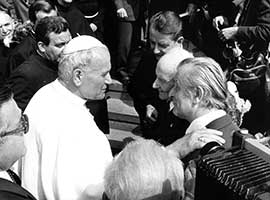 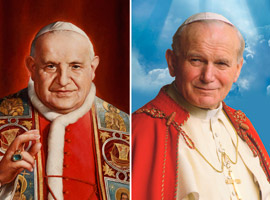 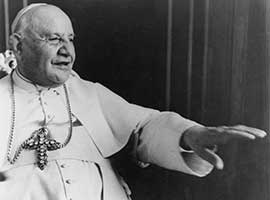 VATICAN CITY (CNS) -- Canonizing two recent popes in the presence of his immediate predecessor, Pope Francis praised the new Sts. John XXIII and John Paul II as men of courage and mercy, who responded to challenges of their time by modernizing the Catholic Church in fidelity to its ancient traditions.

"They were priests, bishops and popes of the 20th century," the pope said April 27, in his homily during Mass in St. Peter's Square. "They lived through the tragic events of that century, but they were not overwhelmed by them. For them, God was more powerful."

The canonizations of Pope John XXIII and Pope John Paul II April 27 marked a historic moment for the Catholic Church. To explore the meaning of the lives of these modern-day spiritual heroes, the U.S. Bishops Office for Media Relations asked several persons to reflect on their contributions. Writers include scholars and theologians – Catholic, Orthodox and Jewish – and media personnel involved in coverage of the much traveled John Paul II. Each could have written a book, but we limited them to the brief reflections presented here.