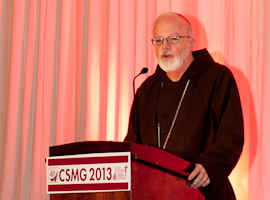 Thank you for taking the time to allow me to speak to you about the Ballot Initiative on Physician Assisted Suicide which was defeated by the citizens of the Commonwealth of Massachusetts on November 6th.

Faced with this very serious challenge both to Catholic teaching and the common good, the dioceses of Massachusetts made a decision to oppose this measure.  At this time I wish to publicly thank Bishop Robert McManus of the Diocese of Worcester, Bishop George Coleman of the Diocese of Fall River and Bishop Timothy McDonnell of the Diocese of Springfield for their commitment and important contributions to the work of defeating this initiative. I also want to thank the many dioceses and Catholic organizations and various health care systems for their very generous contributions to our effort.

More than 2.7 million Massachusetts residents voted on the Physician Assisted Suicide initiative, and it was defeated by approximately 62,000 votes, with a 2% margin of 51%-49%.

Physician Assisted Suicide presents a moral and ethical threat to society, the medical profession, the disabilities community and the common good.  It brings spiritual death, a cheapening of human life, and a corrupting of the medical profession. During the course of preaching and speaking about this issue, I often cited the Hippocratic Oath of "do no harm".  Dr. Barbara Rockett a physician in Massachusetts and former president of the Massachusetts Medical Society wrote in the Boston Globe in July 2012 that the Hippocratic Oath also states that the physician "will give no deadly medicine to anyone if asked nor suggest any such counsel." She adds that "Physician-assisted suicide is in direct conflict with this statement which, when followed, has protected the patient, physician, society and the family, and at the same time has committed doctors to compassion and human dignity."

Our mission is to help prevent suicide and to call for the very best palliative and hospice care for our terminally ill loved ones.

We are grateful for the hard work of so many people in the four dioceses of Massachusetts working in conjunction with other groups — ecumenical and interfaith communities including Jews, Muslims, Greek Orthodox, and Protestants to name just a few.  Along with disabilities groups, medical associations, hospice and palliative care groups — we were able to stop this terrible assault on human life.

At the same time, this calls us to become more focused on the fact that we must do more to promote good palliative and hospice care at the end of life.

The Church has always been committed to compassionate and dignified end of life care.  We must work with our hospice care and palliative care communities to continue to provide quality of care for the terminally ill.  Fear of tremendous pain is advanced as a reason to support physician-assisted suicide.   In almost every instance palliative care can suppress pain.

Hospice was one of the first programs to use modern pain management techniques to care compassionately for the dying. Today there are almost 5,000 hospice programs in the United States with an organized team approach to professional care giving and 1.4 million people are enrolled in hospice care each year.

Furthermore, people already have the right to refuse burdensome, life-extending treatments. They also have the option of leaving advance directives to determine their care when they are no longer able to express their wishes. The death that results from withholding or withdrawing of life-sustaining treatment has always been separated by a bright line from active measures to cause death. Assisted suicide proponents seek to blur this line.

The last time we faced this issue in Massachusetts, I was Bishop of Fall River. We were able to defeat it in the legislature but, afterward, I called my staff together and we came up with ideas of what to do going forward. So, we initiated Alzheimer's units in all the nursing homes of the diocese. We also brought in pain management experts and all our nursing homes became pain-management certified.

Those are the kinds of things that we need to do in the Archdiocese of Boston and throughout the nation. Just as in our struggle against abortion, it is not enough simply to condemn abortion, but we need to help to take care of the women whose lives are in turmoil because of a pregnancy. In the same way, we need to reach out to those facing difficulties at the end of life.

Proponents of Physician Assisted Suicide want us to believe that this is a compassionate response to the plight of people who have a terminal illness. It is not. We are called to comfort the sick, not to help them take their own lives.  As the Catholic Bishops of the United States said in their recent statement on assisted suicide: "True compassion alleviates suffering while maintaining solidarity with those who suffer."

Blessed Pope John Paul II said: "To concur with the intention of another person to commit suicide and to help in carrying it out through so-called "assisted suicide" means to cooperate in, and at times to be the actual perpetrator of, an injustice which can never be excused, even if it is requested."

(7) Those who have studied the evolution of this matter in the Netherlands noted that assisted suicide could lead, first to voluntary euthanasia (requesting direct help to end one's life), and then to involuntary euthanasia (where a third-party determines that, if the patient were in his right mind, he would choose euthanasia).

In the United States we are still a long way from the Dutch situation; however, this is not because the laws in the two states that allow Physician Assisted Suicide are well written or because of careful oversight. What has put the brakes on the growth of physician-assisted suicide in the U.S. is that more than 20 states have rejected proposed legislation and ballot initiatives.  Many people who sided with us felt that Physician Assisted Suicide never should have gone to the people through a costly and divisive ballot initiative, but instead felt it belonged in the legislature where it can be debated and voted on by their representatives.

Organizations such as the Massachusetts Medical Society, the Massachusetts Hospice and Palliative Care Federation, and the American Medical Directors Association all opposed the practice of Physician Assisted Suicide  as unnecessary and dangerous.  The American Medical Association stated "Physician-assisted suicide is fundamen­tally incompatible with the physician's role as healer, would be difficult or impossible to control, and would pose serious societal risks." The goal of medicine is to heal and to cure and, where that is not possible, to comfort the patient.

The World Health Organization stud­ies suicides throughout the world. One of their pleas to governments is to avoid presenting suicide as a solution to peoples' pain and problems.

I do not think it is an accident that Oregon, one of two states to legalize physician assisted suicide, has one of the highest suicide rates in the United States.

In Massachusetts, dozens of newspapers such as the Boston Globe and Boston Herald endorsed our position.  Elected officials from across the Commonwealth, prominent liberal and conservative voices all were committed to defeat of this serious threat to the terminally ill and to our society.

The Catholic dioceses of Massachusetts opposition to physician assisted suicide was not a matter of partisan politics, it was simply the exercising of our right to contribute to the exchange of ideas that the Constitution of the United States guarantees. The Church performs an important service by weighing in on moral and ethical issues.

Many people objected to Archbishop Romero advocating for the poor and objected to Reverend Martin Luther King's work on behalf of social justice. They both gave their lives to make their countries better places where human dignity was respected.

We are all called to work for a more just society where the weak and the vulnerable are nurtured and protected.

Our society must continue to work with hospice organizations and other palliative care providers to improve the care provided to the terminally ill.  Patients are best served when the medical establishment, families and loved ones provide support and care with dignity and respect.

We will be judged by how we treat those who are ill and the infirm. They need our care and protection, not lethal drugs.  Let us work together to build a civilization of love – a love which is stronger than death.

Thank you and God Bless.