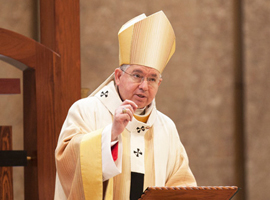 I am heartened by the recent public statements of the leaders of both political parties supporting the consideration of comprehensive immigration reform in the new Congress.I urge the President and Congress to seize the moment and begin the challenging process of fashioning a bipartisan agreement.

For decades, the U.S. Catholic bishops have advocated for a just and humane reform of our nation's immigration system.We have witnessed the family separation, exploitation, and the loss of life caused by the current system.Millions of persons remain in the shadows, without legal protection and marginalized from society.As a moral matter, this suffering must end.

I invite our fellow Catholics and others of good will to make their voices heard in support of this important issue.I encourage our elected officials to work toward the creation of a system which upholds the rule of law, preserves family unity, and protects the human rights and dignity of the person.