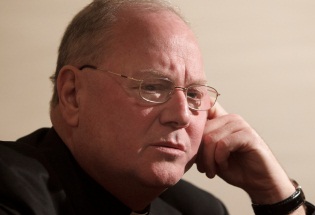 Just last August, I had the honor of concelebrating the Mass of Dedication for the Cathedral of the Resurrection in Kiev. A particularly moving moment came when Metropolitan Shevchuk asked the Lord's protective hand upon believers suffering persecution for their faith anywhere in the world. That such a heartfelt plea came from a people who had themselves been oppressed for so long made it all the more poignant.

This morning I want to invite us to broaden our horizons, to "think Catholic" about our brothers and sisters in the faith now suffering simply because they sign themselves with the cross, bow their heads at the Holy Name of Jesus, and happily profess the Apostles' Creed.

Brother bishops, our legitimate and ongoing struggles to protect our "first and most cherished freedom" in the United States pale in comparison to the Via Crucis currently being walked by so many of our Christian brothers and sisters in other parts of the world, who are experiencing lethal persecution on a scale that defies belief. If our common membership in the mystical body of Christ is to mean anything, then their suffering must be ours as well.

The new Archbishop of Canterbury has rightly referred to victims of Christian persecution as "martyrs." We are living in what must be recognized as, in the words of Blessed John Paul II, "a new age of martyrs." One expert calculates that half of all Christian martyrs were killed in the twentieth century alone. The twenty-first century has already seen in its first 13 years one million people killed around the world because of their belief in Jesus Christ – – one million already in this still young century.

That threat to religious believers is growing. The Pew Research Center reports that 75 percent of the world's population "lives in countries where governments, social groups, or individuals restrict people's ability to freely practice their faith." Pew lays out the details of this "rising tide of restrictions on religion," but we don't need a report to tell us something we sadly see on the news every day.

While Muslims and Christians have long lived peacefully side-by-side in Zanzibar, for instance, this past year has seen increasing violence. Catholic churches have been burned and priests have been shot. In September one priest was the victim of a horrific acid attack. Nigeria has also been the site of frequent anti-Christian violence, including church bombings on our holiest days.

The situation in India has also been grave, particularly after the Orissa massacre of 2008, where hundreds of Christians were murdered and thousands displaced, and thousands of homes and some 400 churches were torched. Just recently, a Christian couple was recently attacked by an angry mob just because of their faith, their Bibles torn from their hands.

We remember our brothers and sisters in China, where Catholic bishops and other religious leaders are subject to state supervision and imprisonment. Conditions are only getting worse, as the government closes churches and subjects members of several faiths to forced renunciations, so-called re-education, and torture.

Of course, it's not just Christians who suffer from religious persecution, but believers in other faiths as well. Much religious persecution is committed by Muslims against other Muslims. Buddhists in Tibet suffer under government torture and repression. In Myanmar Muslims suffer at the hands of Buddhist mobs. All of us share apprehension over  reports of rising anti-Semitism.

But there is no escaping the fact that Christians are singled out in far more places and far more often.

I don't have to tell anyone in this room that our brothers and sisters in the Middle East face particular trials. As Patriarch Bartholomew of Constantinople has observed, for Christians in the Middle East, "even the simple admission of Christian identity places the very existence of [the] faithful in daily threat…Exceptionally extreme and expansive occurrences of violence and persecution against Christians cannot leave the rest of us – who are blessed to live peacefully and in some sense of security – indifferent and inactive."

The humanitarian catastrophe that continues to unfold in Syria has been particularly close to our hearts these past few months. We've prayed for and stood in solidarity with the Church and the people of Syria, and with Pope Francis and the bishops of the Middle East in their call for peace.

It's no surprise that this violent and chaotic situation has bred even more religious persecution. Of course we're all familiar with Syria's venerable history as the place from which our faith spread to the rest of the world, and Syria has long been home to a sizable Christian minority. Yet those Christians who have remained in Syria face ever-present, rising threats of violence.

Last April two of our Orthodox brother bishops were kidnapped in Aleppo by gunmen as they returned from a humanitarian mission. Their driver was shot and killed. And a little less than a year ago an Orthodox priest from Hama was killed by a sniper while helping the wounded. Similarly tragic violence against believers is now commonplace.

Just as Syrian Christians have suffered from the war raging in their land, the war in Iraq has devastated that ancient Christian community in that country as well. As Bishop Shlemon Warduni of Iraq tearfully told us during our spring assembly in 2012, remember, the situation of Christians there "became a tragedy of immense proportions after 2003," with many religious and lay faithful tortured and killed.

Violent attacks continue to terrorize the Iraqi people. Just a little over a year ago the war's worst massacre of Iraqi Christians occurred in a brutal attack on Our Lady of Salvation Church in Baghdad, where some 58 believers were massacred. Those martyred for their faith included their parish priest who died holding a crucifix, forgiving the gunmen and asking him to spare his people.

The situations in Syria and Iraq wrench our hearts, but the plight of Christians in Egypt is no better. This past summer saw the serious escalation of violence against our brothers and sisters there, as the ancient Coptic Christian community has been targeted. Dozens of Coptic churches have been burned; Christian-owned businesses and hotels have been attacked; and individual believers have been murdered.

To take one example, John Allen reports that in August, "hundreds of Muslim extremists stormed a school run by Franciscan sisters in … Upper Egypt, where they reportedly raped two teachers. Three nuns were paraded before the crowd as prisoners of war." It was only through the intervention of a Muslim lay teacher that other sisters' lives were spared.

We as bishops, as shepherds of one of the most richly blessed communities of faith on the planet, as pastors who have spoken with enthusiastic unity in defense of our own religious freedom, must become advocates and champions for these Christians whose lives literally hang in the balance.

Pope Francis recently invited us all to an examination of conscience in this regard during his General Audience on September 25:

"When I hear that so many Christians in the world are suffering, am I indifferent, or is it as if a member of my own family is suffering? When I think or hear it said that many Christians are persecuted and give their lives for their faith, does this touch my heart or does it not reach me? Am I open to that brother or that sister in my family who's giving his or her life for Jesus Christ?  Do we pray for one another? How many of you pray for Christians who are persecuted?  How many? Everyone respond in his own heart. It's important to look beyond one's own fence, to feel oneself part of the Church, of one family of God!"

I am convinced that we have to answer those questions of Pope Francis, not merely as individual believers, but collectively as a body of bishops.

So you ask me, what can we do? Without any pretense of being exhaustive, here are some ideas I'd like to lay before you, with a nod to John Allen and his recent compelling work on this topic.

First, we can encourage intercession for the persecuted. Remember how the "prayers for the conversion of Russia" at the end of Masses over a half-century ago shaped our sense of what was going on behind the Iron Curtain? A similar culture of prayer for persecuted Christians today, both in private and in our liturgical celebrations, could have a similar remedial effect.

We can also make people aware of the great suffering of our brothers and sisters with all the means at our disposal. Our columns, our blogs, our speeches, and our pastoral letters can reference the subject. We can ask our pastors to preach on it, and to stimulate study sessions or activist groups in their parishes. We can encourage our Catholic media to tell the stories of today's new martyrs, unfortunately abudndant. Our good experience defending religious freedom here at home shows that, when we turn our minds to an issue, we can put it on the map.  Well, it's time to harness that energy for our fellow members of the household of faith hounded for their beliefs around the world.

We know the importance of supporting organizations such as Aid to the Church in Need, the Catholic Near East Welfare Association, Catholic Relief Services, and the Society for the Propagation of the Faith, who have done heroic work, while among our Protestant brothers and sisters groups such as Open Doors make a similar contribution. Writers such as Nina Shea, Paul Marshall, John Allen, and Phillip Jenkins here in the United States help keep the issue alive, as does our own Committee on International Justice and Peace.

Finally, we can insist that our country's leaders make the protection of at-risk Christians abroad a foreign-policy priority for the United States. We can also cajole political leaders to be more attentive to the voices of Christians on the ground, since those Christians will  certainly feel the consequences of whatever the West does or doesn't do. As Dr. Thomas Farr reminded us at our spring meeting a couple summers ago, the protection of religious freedom abroad, and advocacy of oppressed believers, has hardly been a high foreign policy priority for administrations of either party.

In general, my brothers, we can make supporting the suffering Church a priority – – not one good cause among others, but a defining element of our pastoral priorities. As historians of this conference know, speaking up for suffering faithful abroad has been a hallmark of our soon-to-be-century of public advocacy of the gospel by the conference of bishops in this beloved country we are honored to call our earthly home.

Protecting religious freedom will be a central social and political concern of our time, and we American bishops already have made very important contributions to carrying it forward. Now we are being beckoned – – by history, by Pope Francis, by the force of our own logic and the ecclesiology of communion – – to extend those efforts to the dramatic front lines of this battle, where Christians are paying for their fidelity with their lives. As the Council reminded us, we are bishops not only for our dioceses, not only for our nation, but for the Church universal.

May all the blessed martyrs, ancient and new, pray for us, as we try to be confessors of the faith.