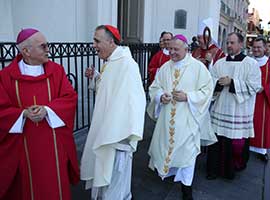 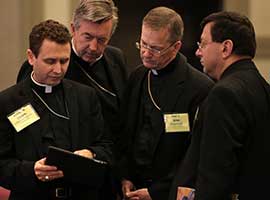 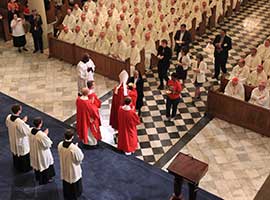 W. Bradford Wilcox, director of the National Marriage Project at the University of Virginia, pictured above, gave a presentation on Marriage and the Economy during the 2014 USCCB spring meeting in New Orleans. CNS photo/Bob Roller

The U.S. Conference of Catholic Bishops (USCCB) held their 2014 Spring General Assembly in New Orleans June 11-13.  View video-on-demand of the public sessions and links to related USCCB news releases and coverage from Catholic News Service on this page. Links to the agenda, speeches, votes and other material are posted in the right hand column of this page.

NEW ORLEANS (CNS) -- During their June 11-13 spring general assembly in New Orleans, the nation's Catholic bishops voted to extend their Ad Hoc Committee on Religious Liberty and to approve work on a limited revision of their quadrennial document aimed at guiding Catholics in election decisions.

They also were urged to promote and support Catholic families by paying close attention to the upcoming synod on the family at the Vatican and to promote the World Meeting of Families next year in Philadelphia.

The bishops heard about the progress made and the work that still needs to be done on efforts to protect children from sexual abuse. They received a report about their aid to typhoon victims in the Philippines and were advised about the work being done to make sure religious educational materials conform to the Catechism of the Catholic Church.

Law professor Helen Alvare from George Mason University in Arlington, Va., pictured above, gave a talk on Poverty and the New Evangelization at the 2014 USCCB spring meeting in New Orleans. CNS photo/Bob Roller

The bishops voted to permit the USCCB Committee on Clergy, Consecrated Life and Vocations to seek a renewed recognitio, or approval, from the Vatican for the National Directory for the Formation, Ministry and Life of Permanent Deacons in the United States. Vatican approval to the text would be for another five-year term.