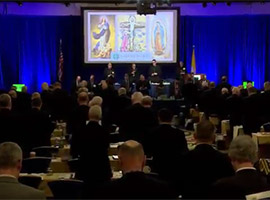 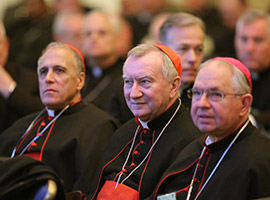 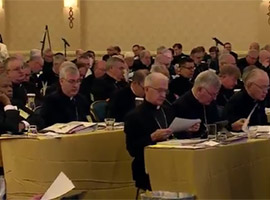 Brief bios of the speakers at the 2018 November General Assembly of Bishops.

A practicing Catholic and nationally known writer, speaker and advocate for survivors, family members, priests and all others wounded by abuse within the Church. A 30-year publishing entrepreneur and certified mediator, Teresa has provided programs and resources for integrating faith into recovery for over 15 years. She co-founded both The Healing Voices Magazine community and Spirit Fire. Teresa served ten years on her bishop’s advisory board and currently serves as head of the Northern Virginia Human Trafficking Task Force.

A practicing Catholic with a jurisprudence doctorate and thirty years of expertise in negotiation, communication, and facilitating dispute resolutions among diverse interest groups. Luis has been an active participant in his diocesan survivor program and, for 15 years, has served on its Review Board. He has spoken to the USCCB National Review Board and other groups, including being featured in a USCCB SCYP webinar this year. Currently serving in an advisory capacity for and as a board member for Spirit Fire, Luis is a husband and father of three daughters.

The Executive Director for the National Federation for Catholic Youth Ministry (NFCYM). Previously, she served as Associate Director for the Office and Religious Education and Division Coordinator of Youth Ministry for the Archdiocese of Los Angeles. Christina has a bachelor’s degree in psychology and a master’s degree in social work from the University of Southern California. In her role with NFCYM, she is also a member of the core team for the National Dialogue on Catholic Pastoral Ministry with Youth and Young Adults, a collaborative initiative with several national organizations and the USCCB.

The Rector/President of Sacred Heart Major Seminary in Detroit, Michigan. Monsignor Lajiness was ordained to the priesthood in 1995. He served as Secretary to Cardinal Edmund Szoka, President of the Pontifical Commission of Vatican City State, from 1997-2002. In 2002, Msgr. Lajiness was appointed Director of Undergraduate Formation at Sacred Heart Major Seminary; in 2003, he was appointed to serve as Dean of Studies. Since 202, Msgr. Lajiness has served as Sacred Heart’s thirteenth Rector and President.

The Victims Assistance Coordinator for the Archdiocese of Los Angeles. She has held this position since 2016, although she was worked with the Archdiocese assisting with abuse claims for over ten years. Dr. Banis is a clinical psychologist whose work focuses on children, adolescents, and their families. Dr. Banis also serves as an Associate Professor of Psychology at Occidental College in Los Angeles.