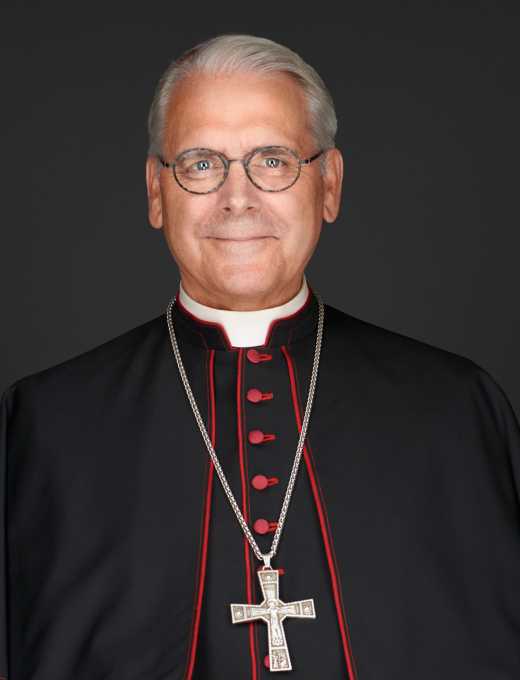 Archbishop Paul S. Coakley was born to John and Mary Coakley in Norfolk, Va., in 1955 and lived there with his father, mother and older brother, John, until he was age 2. The family relocated to Metairie, La., where his sister, Mary Christina, was born. After beginning his elementary education at Saint Mary Magdalen Catholic School, the family moved in 1965 to Overland Park, Kan.  Archbishop Coakley’s secondary education was completed in public schools in Overland Park.

After graduation from high school, he attended the University of Kansas where he completed his undergraduate studies in English and Classical Antiquities in 1977. During this period he was a student in KU’s Integrated Humanities Program, where he studied under John Senior, Dennis Quinn and Frank Nelick.

Upon completing university studies, Archbishop Coakley traveled in Europe and briefly considered a monastic vocation at the Abbey of Notre Dame de Fontgombault in France, before returning to begin seminary studies for the Diocese of Wichita in 1978.

On Dec. 16, 2010, Bishop Coakley was appointed by Pope Benedict XVI as the fourth Archbishop of the Archdiocese of Oklahoma City.  He was installed as metropolitan archbishop on Feb. 11, 2011.

Archbishop Coakley has selected "Duc in Altum" (Put Out into the Deep) as his episcopal motto. It is found in Saint Luke’s gospel when Jesus, after teaching the crowds from Simon’s boat, invites the apostles to "put out into the deep" and lower their nets for a catch (Lk.5:4). Obedient to Jesus’ command, Simon Peter and his companions cast their nets as directed, and “caught such a great number of fish that their nets were at the breaking point” (Lk. 5:4).  Jesus calls the Church today, as always, to put out into the deep, as a witness to hope, to hear and to respond joyfully to his word with faith and confidence. It is a call to embrace the challenges and opportunities of the New Evangelization.