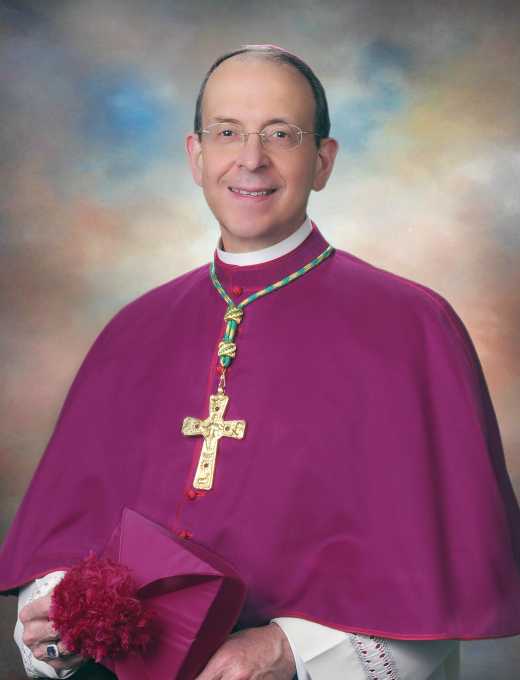 Born in Louisville, Ky., in 1951, William Edward Lori is the son of Francis and Margaret Lori.

The future archbishop obtained a bachelor’s degree from the Seminary of St. Pius X, Erlanger, Ky., 1973; a master’s degree from Mount St. Mary’s Seminary in Emmitsburg, Md., 1977; a doctorate in sacred theology from The Catholic University of America in Washington, D.C., 1982. He was ordained to the priesthood for the Archdiocese of Washington by Cardinal William Baum in 1977 in St. Matthew Cathedral in Washington. His first assignment was as associate pastor of St. Joseph Parish in Landover, Md. Thereafter, he served as secretary to Cardinal James Hickey, chancellor, moderator of the curia and vicar general. In 1995, Archbishop Lori was ordained Auxiliary Bishop of Washington. In 2001, he was appointed bishop of the Diocese of Bridgeport, Connecticut.

In 2002, in recognition of his role as an emerging leader on the Church’s response to the sexual misconduct crisis, Archbishop Lori was appointed to the USCCB Ad Hoc Committee on Sexual Abuse. He was instrumental in drafting the landmark Charter for the Protection of Children and Young People. The Vatican-approved “Essential Norms” of the Charter are now particular law for the Catholic Church in the United States to ensure that no one who works for the Catholic Church will ever pose a threat of any kind to any person, young or old.

In 2005, he was elected Supreme Chaplain of the Knights of Columbus, where he has the responsibility of overseeing the spiritual welfare of the Order’s 1.8 million members and their families. In his extensive writing and speaking on behalf of the Knights, Archbishop Lori has focused on the spiritual vision of the Venerable Father Michael J. McGivney, the founder of the Knights of Columbus. He has helped guide many spiritual initiatives of the Order, most notably the Order’s third Eucharistic Congress held in Chicago in 2005 and the International Marian Congress and Guadalupe Festival held in Phoenix in 2009.

In September 2011, New York Archbishop Timothy M. Dolan, then USCCB president, appointed Archbishop Lori as chairman of a newly formed Ad Hoc Committee for Religious Liberty to address growing concerns over the erosion of freedom of religion in America. In October 2011, serving as new head of the ad hoc committee, Archbishop Lori called on Congress to defend the American legacy of religious liberty during a hearing before the Subcommittee on the Constitution of the House of Representatives Judiciary Committee.

In March 2012, Archbishop Lori’s committee issued “Our First, Most Cherished Liberty,” a comprehensive statement of the U.S. bishops on religious liberty. He served as chairman of the Ad Hoc Committee for Religious Liberty until 2017.

On March 20, 2012, Pope Benedict XVI named Archbishop Lori the 16th Archbishop of Baltimore. The Mass of installation occurred at the Cathedral of Mary Our Queen in Baltimore May 16, 2012.

Archbishop Lori in June 2016 released his first pastoral letter in Baltimore, “A Light Brightly Visible: Lighting a Path to Missionary Discipleship.” In the letter, he laid out his fervent desire for parish planning based on helping local Catholic communities call their parishioners to become – echoing the words of Pope Francis – “missionary disciples” who will invite others to experience a personal relationship with Jesus.

In February 2018, he released “The Enduring Power of Dr. Martin Luther King Jr.’s Principles of Nonviolence: A Pastoral Reflection” to commemorate the 50th anniversary of the assassination of the civil rights leader. He also hosted an interfaith prayer service in April 2018 at the Cathedral of Mary Our Queen to mark the anniversary.

In January 2019, Archbishop Lori released “The Journey to Racial Justice: Repentance, Healing and Action,” acknowledging sins of racism within the Church in the past and present, and suggesting concrete measures to combat racism and promote racial justice.