Survey of Youth and Young Adults on Vocations: Major Findings

This study identifies subgroups in  the never-married Catholic population—including teens and adults—and compares  those who have considered a vocation at least “a little seriously” to those who  say they have not considered this or who say they did so, but not seriously.

Individual  Characteristics
There are generational differences in the consideration of  vocations. A low point appears within the Post-Vatican II Generation (i.e.,  those born 1961 to 1981) with less than one in ten male and female respondents  of this generation saying they have considered a vocation at least “a little”  seriously. Vocational consideration appears to rebound slightly among the  Millennial Generation (i.e., those born after 1981), particularly among men of  this generation. 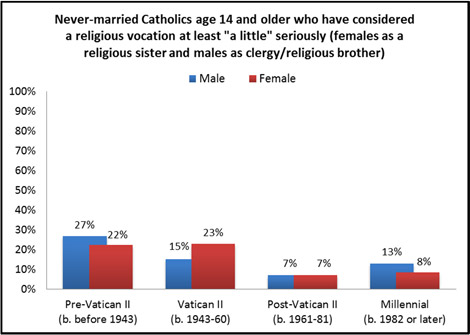 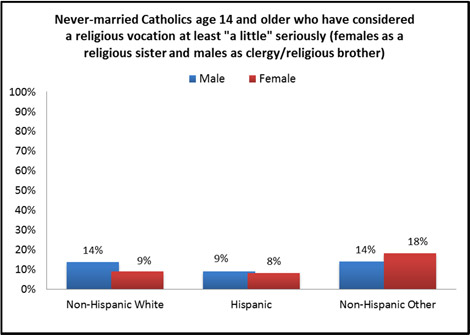 Beliefs and Practices
Outside of generation and race and ethnicity, many of the  subgroups differences identified in the study are related to participation in groups, activities, and  personal relationships. Surprisingly, there are fewer subgroup differences  related to matters of belief. For example, those who believe in the Real  Presence are no more likely to have considered a vocation than those who do not  (accounting for subgroup margins of error and statistical significance). One’s  conception of God (including beliefs about having a personal relationship with  God) is also unrelated to the consideration of vocations.

Combined Influences
The results above are based on rather simple  comparisons—whether one does something or does not or whether one has or has  not been encouraged. The study also weighed the relative importance of each of  these factors as being potentially influential to vocational consideration simultaneously—controlling for the  effects of all other factors to discern what is most important and to weed out  influences that are related to a common cause. Within these models—which are  gender specific—we include substantive variables (e.g., Mass attendance,  enrollment in Catholic schools) and control variables that measure race and  ethnicity as well as age. These models utilize logistic regression—a  statistical method for predicting which of two categories a person is likely to  be in given other information we know about them. For this study, these two  groups are: A) those that have considered a vocation at least a little  seriously or more and B) those who have not considered this or those who have,  but not seriously at all. The logistic regression models predict the probability  of respondents considering a vocation given their responses to other questions  in the survey.

In two baseline models—one for men and the other for  women—neither ethnicity nor age is shown to be a strong predictor. Thus,  controlling for both factors, neither the participant’s age nor their being  Hispanic or not make them more or less likely to consider a vocation. However,  among women, being of a race and ethnicity other than non-Hispanic white or  Hispanic does make one more than twice as likely to consider a vocation  compared to those who are non-Hispanic white or Hispanic.3 Among men, Millennial teens (those ages 14 to 17) are less likely than never-married  Catholics of the oldest generation (those born before 1943) to say they have  considered becoming a priest or religious brother. A comprehensive  model—including 39 different variables—increases the amount of variation  explained by a factor of 7 for both male and female respondents.

Consideration of  Becoming a Priest or Religious Brother among Men
Among male respondents, after controlling for all other  factors, those who attended a Catholic secondary school (grades 9-12) are more  likely to have considered becoming a priest or religious brother. Compared to  those who did not attend a Catholic secondary school, these respondents are  more than six times as likely to have considered a vocation. Participation in a  parish youth group during primary school years (grades K-8) is also strongly  related to vocational consideration. These respondents are more than five times  as likely to consider a becoming a priest or religious brother than those who  did not participate in a parish youth group. Given that 75 percent of male  respondents who have considered a vocation report that they first did so when  they were 18 or younger, these two results provide some of the strongest  evidence of a possible causal effect.

Encouragement from others is also important. Respondents who  have one person encouraging them are nearly twice as likely to consider a  vocation as those who are not encouraged. Each additional person encouraging  these respondents increases the likelihood of consideration. The effect is  additive.  Respondents who had three  persons encourage them would be expected to be more than five times more likely  to consider a vocation than someone who was not encouraged by anyone.

Knowing someone who has become a priest, religious sister or  brother, or seminarian also has a positive effect. Respondents who personally  know one of these individuals are more than one and a half times more likely than  someone who does not to consider a vocation themselves. This effect is also  additive and knowing more of these individuals would be expected to increase  the likelihood of a respondent considering a vocation.

Attendance at World Youth Day or at a National Catholic  Youth Conference has a positive effect for male consideration of a vocation.  Those who attended either of these events are more than four times as likely as  those who have not to say they have considered becoming a priest or brother.

Note that neither generation nor race and ethnicity are  statistically significant in the full model. Thus, there is nothing about a  person’s age or race and ethnicity that are associated with lower or higher  likelihoods of consideration, controlling for all other factors. Any  disproportionality in the race and ethnicity of men who decide to become  priests or religious brothers are in part likely to be related to being less  likely to attend Catholic schools or to be involved in youth groups,  comparatively lower levels of encouragement, or not personally knowing clergy  or religious. This could also be related to factors that are important after consideration of a vocation is  made by individuals, such as meeting requirements for entry into a formation  program.

Whereas secondary school is important for male vocational  consideration, it is attendance at a Catholic primary school which is important  for female vocational consideration. Female respondents who attended a Catholic  primary school are more than three times as likely as those who did not to  consider becoming a religious sister. Parish youth group participation is also  important for female respondents. However, unlike males, it is participation  during high school years rather than primary school years that has an effect.  Women who participated in a parish youth group during these teen years are more  than nine times as likely to consider becoming a religious sister.

Similar to male respondents, encouragement is also a  positive factor. With nearly the same effect as is demonstrated among men,  women are nearly twice as likely to consider a vocation when encouraged by  another person to do so.

Also parallel to men, women who have used traditional media  in the last year to consume or follow religious or spiritual content are more  likely than those who do not to say they have considered a vocation.

Among the adults surveyed (excluding those ages 14 to 17 in the sample) who say they have  considered a vocation, most report that they did so between the ages of 13 and  24. Additionally, one in four Catholic females who have considered becoming a  religious sister did so before they were a teenager. 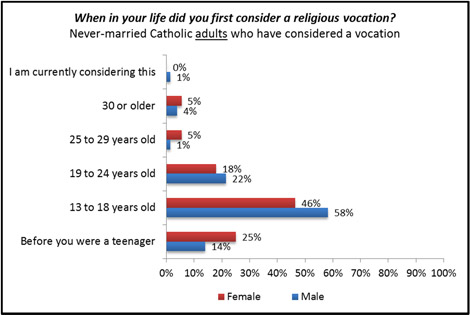 Although most Catholics who are becoming priests, religious  brothers, or religious sisters now are typically in their 30s or even older, it  is likely that the roots of these vocations were established in their teen  years or even earlier.

In Their Own Words
Respondents who said they had never considered a vocation  were asked in an open ended question, “Why do you think you have never  considered this?” Their responses to this question were coded into categories  based on their content.

Among female respondents who have never considered a  vocation as a religious sister, the most common responses were related to a  general lack of interest (31 percent), celibacy (16 percent), not having a  calling to seek a vocation (11 percent), discomfort with the lifestyle they  would need to adopt (10 percent), and having some doubts about their faith or  not feeling religious enough to seek a vocation (9 percent).

Challenges
To the degree that vocational formation programs have  educational prerequisites including college, Hispanic adult Catholics who have  considered a vocation may face additional challenges, as Hispanic respondents  are the least likely to report  attending college or obtaining a college degree. Hispanic respondents are also  the least likely to indicate enrollment in a Catholic school at any level of  their education and the results of the study suggest that this makes it less  likely that they will consider a vocation.

At the same time, Hispanic respondents are among the most likely to participate in devotional  practices and other prayer that is associated with a greater likelihood of considering  a vocation. For example, a majority of Hispanic adults and teens (63 percent  and 53 percent, respectively) indicate that they pray the rosary. By comparison,  less than four in ten non-Hispanic white adults and teens say they do so (36  percent and 32 percent, respectively).

At the same time, Hispanic respondents are among the least likely to report that they have  ever been encouraged to seek a vocation. This may be in part because they are  less likely to be enrolled in a Catholic school or registered with a Catholic  parish. It is also the case that family members of Hispanic respondents are  less likely to encourage vocations. Among Hispanic males who have not  considered a vocation seriously, 37 percent agree “somewhat” or “very much”  that they have never felt invited by the Catholic Church to consider this. By  comparison, only 22 percent of non-Hispanic white male respondents indicate  this.

One in five Hispanic respondents (21 percent) also indicates  that citizenship requirements prevented their serious consideration of becoming  a priest or religious brother. Two-thirds of Hispanic never-married males (66  percent) agree at least “somewhat” that their desire to be a father prevented  their serious consideration of a priestly or religious vocation. By comparison  only 51 percent of non-Hispanic white male respondents indicated this.

Conclusion
Although many speak of priest shortages and steep declines  in the number of men and women religious, the survey reveals that there is no  shortage of individuals who seriously consider these vocations among never-married Catholics in the United States.4 Three percent of men say they have “very seriously” considered becoming a  priest or religious brother and 2 percent of women indicate they have “very  seriously” considered becoming a religious sister. This is equivalent to  350,000 never-married men and more than 250,000 never-married women.5 Shepherding more of these individuals on the path to seeking a vocation would  likely require a combination of greater outreach from the Church, encouragement  from others, assistance in obtaining educational prerequisites, and dealing  with other issues such as student loan debt and citizenship status.