Survey of Youth and Young Adults on Vocations: Part II. Consideration of a Vocation among Men

Part II: Consideration of a Vocation among  Men

This section of the report is specific to male respondents and  their consideration of becoming a priest or religious brother. 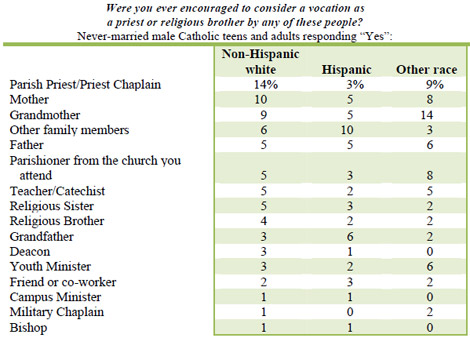 Respondents report an average of 0.7 people that encouraged them.  This average is highest among non-Hispanic white males (0.8 encouragers). By  comparison Hispanic males report 0.5 encouragers and those of other races  indicate having 0.7 encouragers. 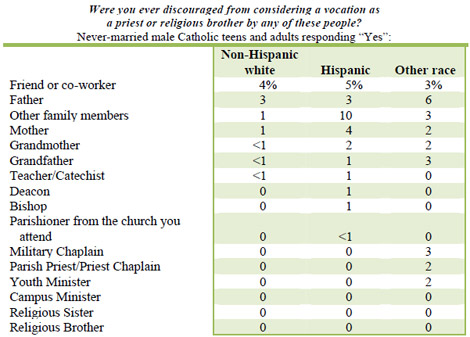 For all three subgroups, friends tend to provide more  discouragement than encouragement. 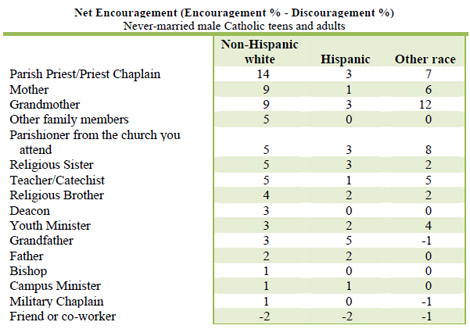 Vocations Presentation Made at School or  Parish

Most male respondents indicate that  they do not recall anyone from a diocese or religious order ever coming to their  parish or school to speak about vocations. Non-Hispanic white respondents are  the most likely to recall a visit (31 percent) and Hispanic respondents are the  least likely to do so (20 percent). Even among those who do recall such a  visit, few say this encouraged them to consider a religious vocation “somewhat”  or “very” seriously. 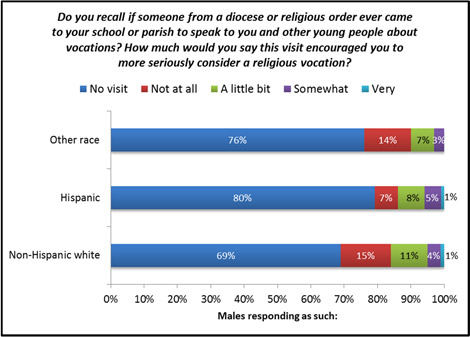 As the figure below shows, those who attended a Catholic  educational institution are more likely than those who did not attend to report  having seen a vocation presentation. 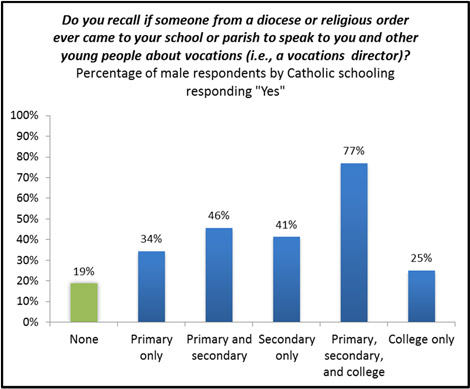 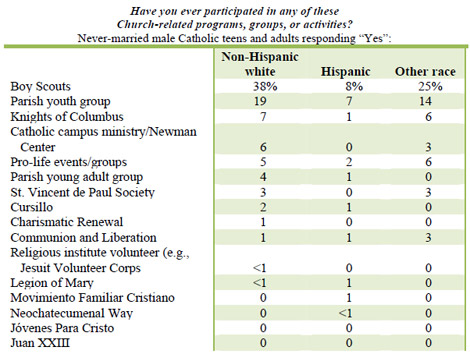 Small numbers of male respondents report being active in any other  programs groups, or activities listed. Some report participation in the Knights  of Columbus, college campus ministry, pro-life events and groups, and parish  young adult groups.

Hispanic male respondents are generally less likely than other  respondents to indicate involvement with any of the items listed (with the  exception of Movimiento Familiar Cristiano).

Attitudes about the Church and Vocations

Majorities of male respondents are  most likely to agree “somewhat” or “very much” that Catholic priests are well  respected in their community and that priests and brothers do important work.  Hispanic respondents, generally, are less likely than others to respond as  such. 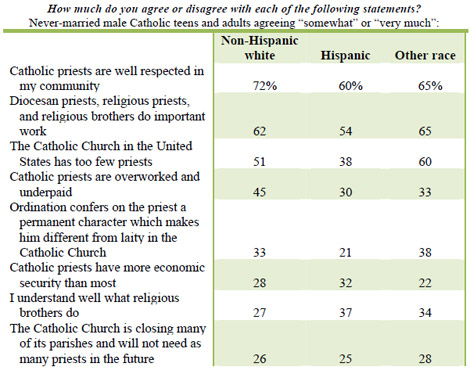 Consideration of Becoming a Priest or  Religious Brother

Overall, 13 percent of male  respondents say they have ever considered becoming a priest or brother. 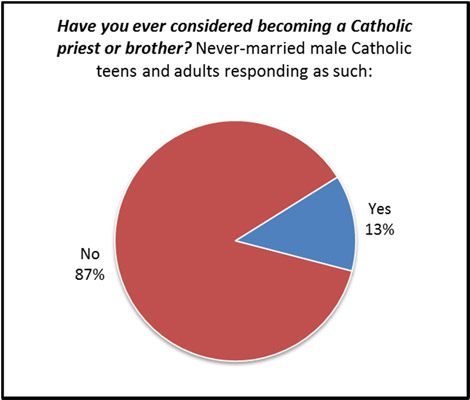 In 2003, when CARA first fielded this question in our national  polls, 20 percent of male respondents indicated they had considered becoming a  priest or brother. This dropped to 17 percent in a 2008 CARA survey. Although  these differences are close to survey margins of sampling error, the pattern  over time indicates the possibility that there is a slow erosion in males of  ever having considered a priestly or religious vocation in the last decade.35 However, if this decline is real, it is likely related to generational changes  with older Catholics, who may have been more likely to consider this in their  youth, gradually being replaced by a younger generation who are not equally  likely to consider this.

As the first figure on the next page shows, 7 percent of  never-married Catholic males say they have “somewhat” or “very” seriously  considered becoming a priest (3 percent “very serious” only). As the second  figure shows, a majority (53 percent) say they first considered a vocation  between the ages of 13 and 18—indicating that the experiences of male Catholics  during their secondary school years may be among the most important. One in  four (22 percent) indicates they considered this before their teen years and a  similar percentage (19 percent) say they did so between the ages of 19 and  24. 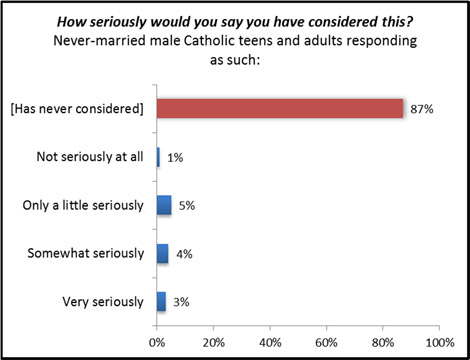 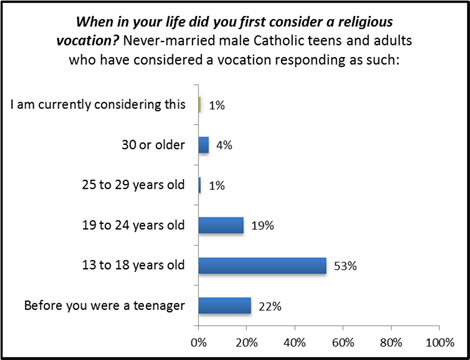 Hispanic males are the least likely to say they have ever  considered becoming a priest or brother. However, the differences between these  subgroups are not statistically significant. 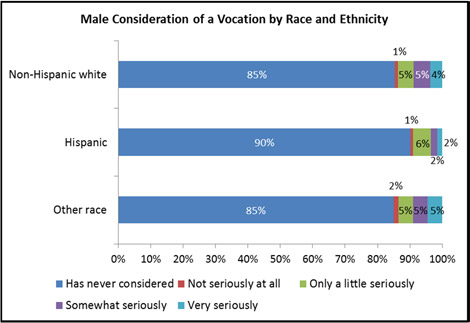 Reasons for Not Considering a Vocation

Respondents who say they have never considered becoming a priest  or brother were asked, “Why do you think you have never considered this?” as an  open-ended question. They could then respond in their own words. These comments  have been categorized by theme. Overall, male respondents were most likely to  reference a general lack in interest and celibacy for not considering a  vocation as a priest or religious brother. Hispanic respondents are more likely  than non-Hispanic white respondents to cite a general lack of interest (46  percent compared to 34 percent). 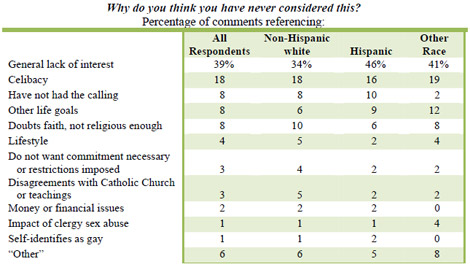 Celibacy
Nearly one in five (18 percent) cite celibacy as a reason for not  considering a vocation. Comments representative of this category include:

Have  not had the calling
Fewer than one in ten (8 percent) indicate that they have not had  the calling to become a priest or religious brother. Comments representative of  this category include:

Doubts  faith, not religious enough
Fewer than one in ten (8 percent) say they either have doubts about  their faith or do not feel religious enough. Comments representative of this category  include:

Other reasons
Fewer than one in 20 cited other reasons for not considering a  vocation, including: issues about the lifestyle (4 percent), not wanting to  make the commitment necessary or to have restrictions imposed on them (3  percent), disagreements with the Catholic Church or its teachings (3 percent),  concerns about money or financial issues (2 percent), the impact of the clergy  sex abuse (1 percent), or because they are gay (1 percent). Six percent  provided a response that could not be classified into these other categories  and there were not a sufficient number of similar responses to create another  category.

Respondents who said they have never considered becoming a priest  or brother or who have but “not very seriously” were then provided a list of  reasons from which to choose that would explain their lack of consideration.  More than six in ten (63 percent) agreed “somewhat” or “very much” that this  would not be a lifestyle and work that they would prefer. Majorities also  agreed at least “somewhat” that they want to be a father (55 percent) or that  they simply just never really thought about it (55 percent). Just under half cite  celibacy (49 percent; compared to 18 percent citing this in response to the  open-ended question). 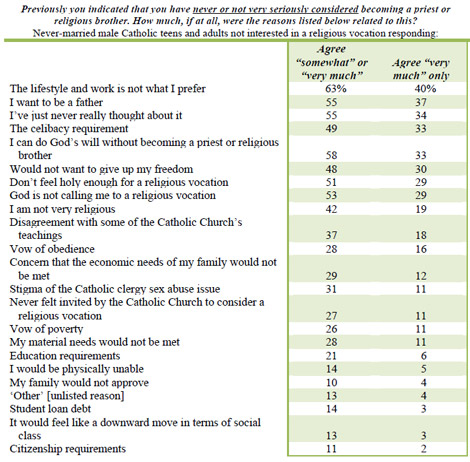 Respondents also frequently cited the following for their lack of  consideration: they can do God’s will without becoming a priest or brother (58  percent), that God is not calling them for a religious vocation (53 percent),  they don’t feel holy enough (51 percent), or they would not want to give up  their freedom (48 percent).

Forty-two percent agreed “somewhat” or “very much” that not being  very religious is a reason for not considering a vocation. Only 37 percent  agreed similarly that disagreement with Church teachings was a reason.  Thirty-one percent cited the stigma of the clergy sex abuse issue (compared to  1 percent in response to the open-ended question). Only one in five (21  percent) cited educational requirements and 14 percent indicated student loan  debt was an issue. Eleven percent cited citizenship requirements.

Non-Hispanic white males are slightly less likely than Hispanic and other race males to agree “somewhat”  or “very much” that celibacy requirements are the reason they have never  considered a vocation (41 percent compared to 50 percent of Hispanic and other  race males). As shown below, there are several reasons that Hispanic  respondents are more likely than others to cite for not considering a vocation.  First among these is the desire to be a father (66 percent).36 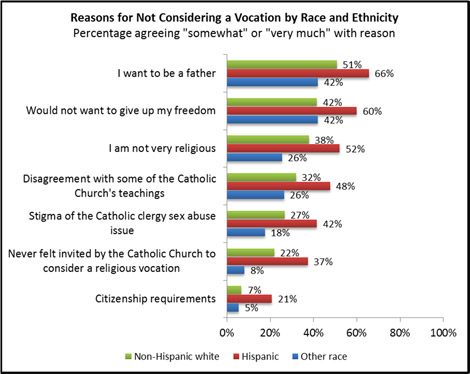 Majorities of Hispanic respondents also say they do not want to  give up their freedom (60 percent) and that they are not very religious (52  percent). Many other Hispanic respondents cite disagreement with Church  teachings (48 percent) and the stigma of the clergy sex abuse issue (42  percent). More than a third (37 percent) agrees at least “somewhat” that they  have never felt invited by the Church to consider a vocation and one in five  (21 percent) similarly cites citizenship.

Respondents were asked to select one of the reasons that was most important to their lack of  consideration. These are shown below for each race and ethnicity group.  Hispanic and other race respondents selected wanting to be a father in the top  three.

Reasons for Considering a Vocation

Of those male respondents who have considered a religious vocation,  31 percent indicate that they were considering a vocation for a specific  religious order.

Consideration of Becoming a Permanent  Deacon

Male respondents were asked if they had ever considered becoming a  permanent deacon.38 Only one in 20 say they have considered this. Similarly, 5 percent of adult  Catholic men (married and unmarried) responded as such in a CARA 2007 survey asking this question.39 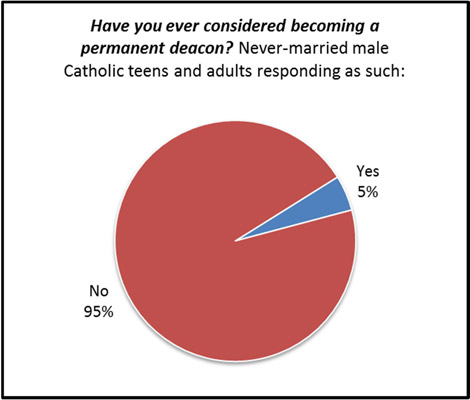 Thus, fewer Catholic  males consider becoming a permanent deacon than a priest or religious brother.  However, this may be related to the age requirement for becoming a deacon.  Given the rapid growth in the permanent diaconate in the United States in  recent decades, it is also likely that many who consider becoming deacons  follow through and seek out this vocation.

As the figure on the next page shows, among those who have  considered becoming a permanent deacon, few have done so seriously. 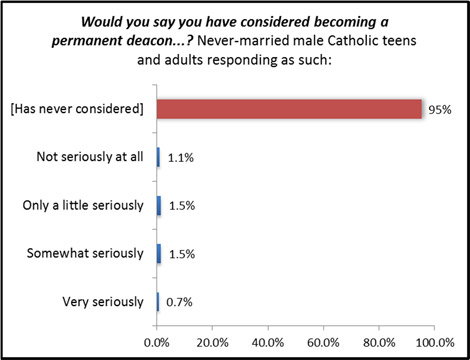 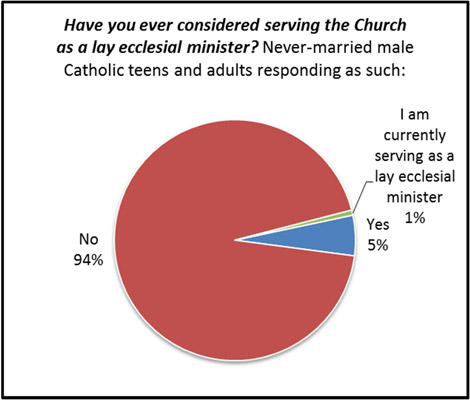 Thus, fewer Catholic  males consider becoming a lay ecclesial minister than a priest or religious  brother. However, this may be related to the age at which lay ecclesial  ministers often report feeling the “first call” to ministry.42

There are no statistically significant differences between racial  and ethnic subgroups in consideration of becoming a lay ecclesial minister.

As shown in the figure below, 4 percent of never-married male  Catholics say they have “somewhat” or “very” seriously considered becoming a  lay ecclesial minister. 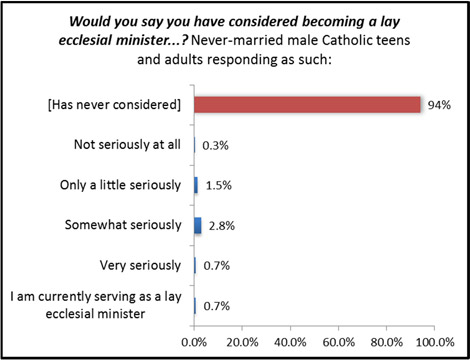