This section of the report combines the information from Part I with Parts II and III showing subgroup differences in the consideration of vocations by gender. Subgroups of respondents are compared by their likelihood of considering a vocation at least “a little seriously” versus those who say they have not considered this or who said they did so, but not seriously.

The tables that follow show the percentages of those in each subgroup who considered a vocation among male and female respondents. Where these percentages are significantly higher than 12 and 10 percent, respectively, one can say there is an association between being in this subgroup and greater consideration of a vocation. However, interpretations of causality must be cautioned for two reasons:

Differences are shown whether these are small or large. Sometimes the absence of a difference is just as important and interesting as a large disparity.

Subgroups from the following series of six tables that are especially likely to have considered a vocation include:

Many of the subgroups noted above are related to participation in groups, activities, and personal relationships. Surprisingly, there are fewer subgroup differences related to matters of belief. For example, those who believe in the Real Presence are no more likely to have considered a vocation than those who do not (accounting for subgroup margins of error and statistical significance). One’s conception of God (including beliefs about having a personal relationship with God) is also unrelated to the consideration of vocations.

Following the subgroup tables, results from multivariate regression models are shown. These weigh the relative importance of the factors identified in the subgroup summary tables as being potentially influential simultaneously—controlling for the effects of each. Within these models—which are gender specific—we include variables that measure race and ethnicity as well as age. If these demographic factors are statistically unrelated to vocational consideration then any apparent differences in vocational consideration among these demographic subgroups are instead related to differences in other factors included in the models (e.g., life experience, social networks, media use). 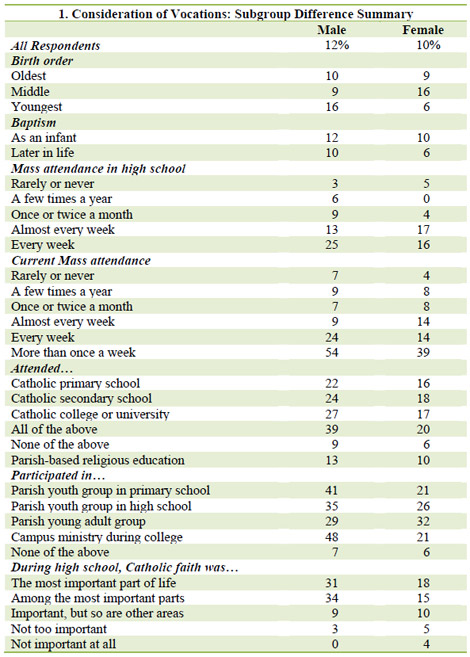 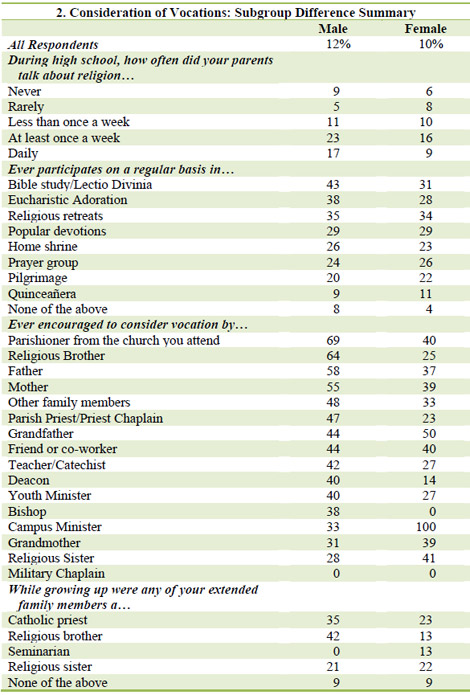 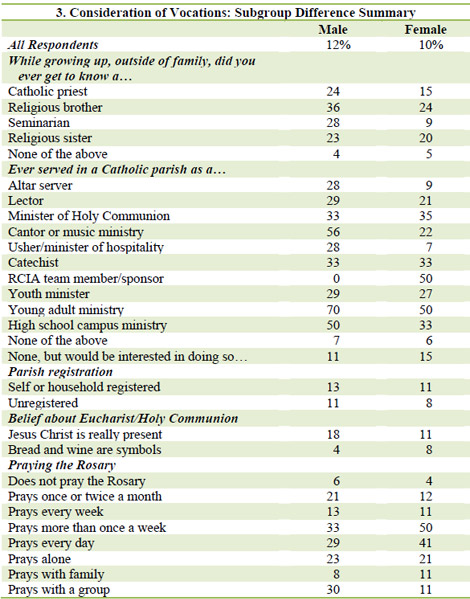 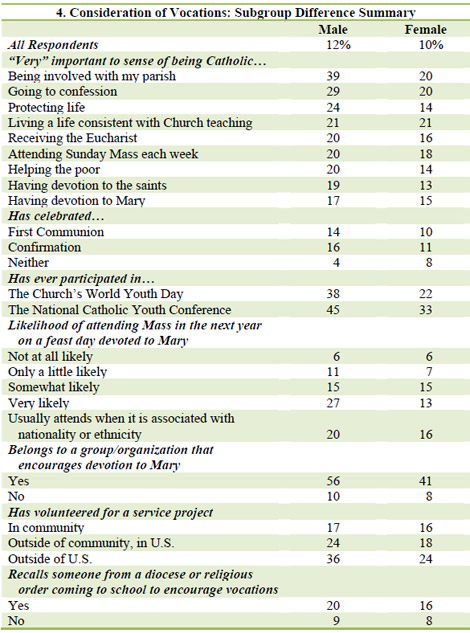 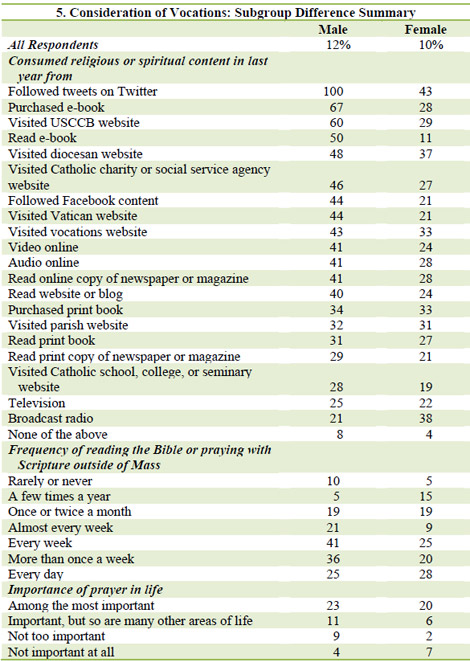 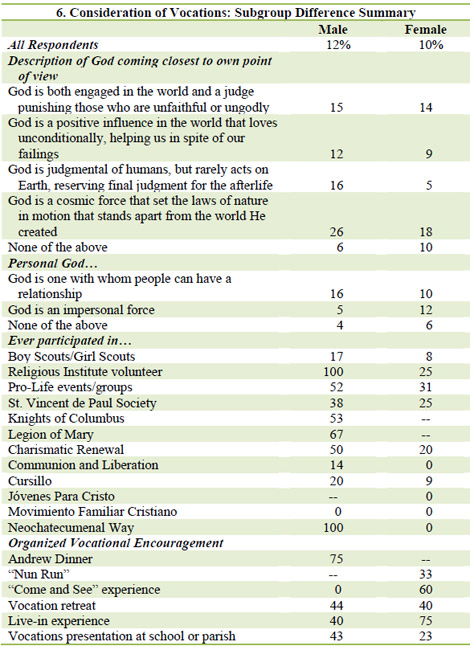 Logistic regression is used to predict which of two categories a person is likely to be in given other information we know about them. For this study, the dichotomous outcome variable is A) those who have considered a vocation at least a little seriously or more and B) those who have not considered this or those who have, but not seriously at all. The logistic regression models predict the probability of respondents considering a vocation given their responses to other questions in the survey.

The tables that follow report exp(B) coefficients for each variable. This is an indicator of the change in proportionate odds resulting from a one unit change in any predictor included in the model. Where these exp(B) are greater than 1.0 this indicates the predictor is positively associated with the outcome (i.e., making this more likely). Where these are less than 1.0 this indicates a predictor is negatively associated with the outcome (i.e., makes this less likely).

For example, in the first regression model for females below the exp(B) for respondents of other races and ethnicities is 2.367 and is statistically significant (only predictors with at least one “*” are statistically significant. Those without an “*” are indistinguishable from 0.0 or indicating no discernible effect—controlling for other factors in the model). We can say that females of other races and ethnicities are 2.4 times more likely to consider becoming a religious sister than non-Hispanic white females in the survey (non-Hispanic white respondents are the “reference” or excluded comparison category here).

There are only two statistically significant predictors in models including only generation and race and ethnicity predictors. Among never-married males, Millennial teens are significantly less likely than those of the oldest generation of never-married male Catholics to say they have considered becoming a priest or religious brother. As noted above, among females, those of other races and ethnicities are more likely than non-Hispanic white females to have considered becoming a religious sister.

These tables indicate that never-married Hispanic males and females are no less likely to consider a religious vocation than never-married non-Hispanic white males and females. Yet, these baseline models are far from complete. The Nagelkere R Square indicates a poor “fit” registering only .08 when a maximum value of 1.0 would predict a perfect fit—or the ability to perfectly predict who has considered a vocation at least a little seriously or more and those who have not.

The next table includes measures identified in the subgroup difference summaries as having an effect on vocational consideration. Some of these have been recoded given the small number of respondents in some of these groups. For example, the survey included a question that asked about 16 different individuals who may have encouraged a respondent to consider a vocation. Rather than introduce these as 16 different predictors these have been added up to create a total number of persons that provided encouragement to each respondent.50 The survey also asked respondents if they knew priests, vowed religious, or seminarians in their family or outside of family. These have been added up as well, creating a total number of priests, vowed religious, and seminarians that each respondent knows personally. Some of the questions have been excluded as predictors because these did not show any significant effect (as shown in the preceding subgroup difference summaries). The regression results for these models are shown on the next page.

As these tables show, among male respondents, controlling for all other factors in the model, having attended a Catholic secondary school is related to a greater likelihood of having considered becoming a priest or religious brother. Compared to those who did not attend a Catholic secondary school, these respondents are more than six times as likely to have considered a vocation (exp(B) = 6.702). Also strongly related to vocational consideration is participation in a parish youth group during primary school years (exp(B) = 5.569). These respondents are more than five times as likely to consider a becoming a priest or religious brother than those who did not participate in one of these. Given that 75 percent of male respondents who have considered a vocation report that they first did so when they were 18 or younger, these two results provide some of the strongest evidence of a possible causal effect.

Encouragement from others is also important. Respondents who have one person encouraging them are nearly twice as likely (exp(B) = 1.900) to consider a vocation as those who are not encouraged. Each additional person encouraging these respondents increases the likelihood of consideration. The effect is additive. Respondents who had three persons encourage them would be expected to be more than five times more likely to consider a vocation than someone who was not encouraged by anyone.

Knowing someone who has become a priest, religious sister or brother, or seminarian also has a positive effect. Respondents personally knowing one of these individuals is about one and half times (exp(B) = 1.623) more likely than someone who does not to consider a vocation. This effect is also additive. Knowing more of these individuals would be expected to increase the likelihood of a respondent considering a vocation. 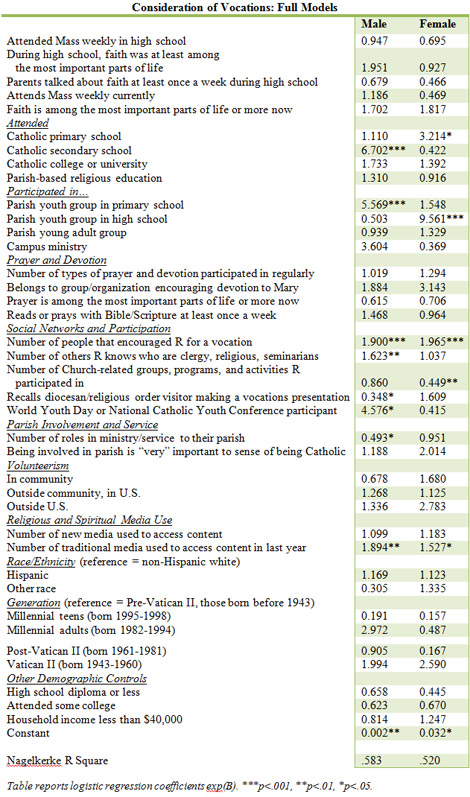 For male respondents, attendance at World Youth Day or at a National Catholic Youth Conference has a positive effect. Those who attended either of these events are more than four times as likely than those who have not to say they have considered becoming a priest or brother (exp(B) = 4.576).

There are also two factors in the model achieving statistical significance that are associated with lower likelihoods of considering a vocation among male respondents. Those who are already involved in parish ministries and service as well as those who can recall a diocesan or religious order visitor to their school or parish making a vocations presentation are less likely than those who do not indicate parish ministry involvement or recall of a vocations presentation to consider a vocation. These effects are evident after controlling for all other factors in the model (e.g., Mass attendance, schooling, importance of faith).

Those already active in parish ministry and service may be satisfied with what they can provide the Church in these capacities. It is more challenging to offer explanations for the negative association with vocational presentations. Given the positive effect of encouragement and knowing clergy and religious this could indicate that personal encouragement is more effective than one-time encouragement in a group setting.

Note that neither generation nor race and ethnicity are statistically significant. Thus, there is nothing about a person’s age or race and ethnicity that are associated with lower or higher likelihoods of consideration, controlling for all other factors in the model. Also, note that the Nagelkere R Square for this model is .583, indicating the model is capable of predicting much of the variation in vocational consideration among male respondents.

Among female respondents, the model predicting consideration of becoming a religious sister includes some parallel results.

Whereas secondary school is important for male vocational consideration, it is attendance at a Catholic primary school which is important for female vocational consideration. Female respondents who attended a Catholic primary school are more than three times as likely as those who did not to consider becoming a religious sister (exp(B) = 3.214). Parish youth group participation is also important for female respondents. However, unlike males it is participation during high school years rather than primary school years that has an effect. Women who participated in a parish youth group during these years are more than nine times likely to consider becoming a religious sister (exp(B) = 9.561).

Similar to male respondents, encouragement is also a positive factor. With nearly the same effect as is demonstrated among men, women are nearly twice as likely to consider a vocation when encouraged by another person to do so (exp(B) = 1.965).

Also parallel to men, women who have used traditional media in the last year to consume or follow religious or spiritual content are more likely than those who do not to say they have considered a vocation (exp(B) = 1.527).

There is one factor in the model for female respondents associated with a lower likelihood of considering a vocation. Women who report that they were involved with Church-related groups and programs—controlling for all other factors in the model—are less likely than those who do not report this activity to consider becoming a religious sister (exp(B) = 0.449). These include things like the Girl Scouts, Cursillo, Pro-Life events and groups, etc.

Again, note that neither generation or race and ethnicity are statistically significant in the model for females. Thus, there is nothing about a person’s age or race and ethnicity that are associated with lower likelihoods of consideration, controlling for all other factors in the model. Also, note that the Nagelkere R Square for this model is .520, indicating the model is capable of predicting much of the variation in vocational consideration among female respondents.