Call to Family Community and Participation 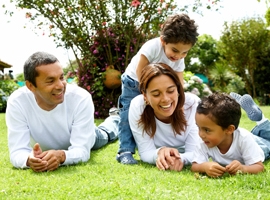 The person is not only sacred but also social. How we organize our society—in economics  and politics, in law and policy—directly affects human dignity and the capacity of individuals to grow in community.  Marriage and the family are the central  social institutions that must be supported and strengthened, not undermined. We  believe people have a right and a duty to participate in society, seeking  together the common good and well-being of all, especially the poor and  vulnerable.

“The existence of each individual is deeply tied to that of others: life is not simply time that passes; life is a time for interactions.” (Pope Francis, Brothers and Sisters to Us [Fratelli Tutti], no. 66)

“Human beings are so made that they cannot live, develop and find fulfillment except ‘in the sincere gift of self to others.’ [62] Nor can they fully know themselves apart from an encounter with other persons: “I communicate effectively with myself only insofar as I communicate with others.’ [63] No one can experience the true beauty of life without relating to others, without having real faces to love. This is part of the mystery of authentic human existence. “Life exists where there is bonding, communion, fraternity; and life is stronger than death when it is built on true relationships and bonds of fidelity. On the contrary, there is no life when we claim to be self-sufficient and live as islands: in these attitudes, death prevails.’ [64]” (Pope Francis, Brothers and Sisters to Us [Fratelli Tutti], no. 87)

"The family is thus an agent of pastoral activity through its explicit proclamation of the Gospel and its legacy of varied forms of witness, namely solidarity with the poor, openness to a diversity of people, the protection of creation, moral and material solidarity with other families, including those most in need, commitment to the promotion of the common good and the transformation of unjust social structures, beginning in the territory in which the family lives, through the practice of the corporal and spiritual works of mercy." (Pope Francis, On Love in the Family [Amoris Laetitia], no. 290, quoting the Final Report of the Synod of Bishops, 10/24/15)

Economic and social policies as well as organization of  the work world should be continually evaluated in light of their impact on the  strength and stability of family life. The long-range future of  this nation is intimately linked with the well-being of families, for the  family is the most basic form of human community.  Efficiency and competition in the marketplace  must be moderated by greater concern for the way work schedules and compensation support or threaten the bonds between spouses and between parents  and children. (United States Conference of Catholic Bishops, Economic Justice for All, no. 93)

The first and fundamental structure for a "human  ecology" is the family . . . founded on marriage, in which the  mutual gift of self as husband and wife creates an environment in which  children can be born and develop their potentialities, become aware of their  dignity and prepare to face their unique and individual destiny. (St. John Paul II, On the Hundredth Year [Centesimus Annus], no. 39)

Insofar as it is a "small- scale Church," the Christian family is called upon, like the "large- scale Church," to be a sign of unity for the world and in this way to exercise its prophetic role by bearing witness to the Kingdom and peace of Christ, towards which the whole world is journeying. Christian families can do this through their educational activity-that is to say by presenting to their children a model of life based on the values of truth, freedom, justice and love-both through active and responsible involvement in the authentically human growth of society and its institutions, and by supporting in various ways the associations specifically devoted to international issues. (St. John Paul II, The Family in the Modern World [Familiaris Consortio], no. 48)

Local individuals and groups can make a real difference. They are able to instill a greater sense of responsibility, a strong sense of community, a readiness to protect others, a spirit of creativity and a deep love for the land. . . . Social problems must be addressed by community networks and not simply by the sum of individual good deeds. (Pope Francis, On Care for Our Common Home [Laudato Si’], nos. 179, 219)

People in every nation enhance the social dimension of their lives by acting as committed and responsible citizens, not as a mob swayed by the powers that be. Let us not forget that “responsible citizenship is a virtue, and participation in political life is a moral obligation.” (Pope Francis, The Joy of the Gospel [Evangelii Gaudium], no. 220, quoting United States Conference of Catholic Bishops, Forming Consciences for Faithful Citizenship, Nov. 2007, no. 13)

Subsidiarity respects personal dignity by recognizing in  the person a subject who is always capable of giving something to others.  (Pope Benedict XVI, Charity in Truth [Caritas in Veritate], no. 57)

The primary  norm for determining the scope and limits of governmental intervention is the  "principle of subsidiarity" cited above. This principle states that,  in order to protect basic justice, government should undertake only those  initiatives which exceed the capacities of individuals or private groups acting  independently. Government should not replace or destroy smaller communities and  individual initiative. Rather it should help them contribute more effectively  to social well-being and supplement their activity when the demands of justice  exceed their capacities. These does not mean, however, that the government that  governs least, governs best. Rather it defines good government intervention as  that which truly "helps" other social groups contribute to the common  good by directing, urging, restraining, and regulating economic activity as  "the occasion requires and necessity demands".  (United States Conference of Catholic Bishops, Economic Justice for All, no. 124)

In order that the right to development may be fulfilled by action:  (a) people should not be hindered from attaining development in accordance with  their own culture; (b) through mutual cooperation, all peoples should be able  to become the principal architects of their own economic and social  development. (World Synod of Catholic Bishops, Justice in the World [Justica in Mundo], no. 71)

But God did not create  man as a solitary, for from the beginning “male and female he created them”  (Gen. 1:27). Their companionship produces the primary form of interpersonal  communion. For by his innermost nature man is a social being, and unless he  relates himself to others he can neither live nor develop his potential. (Second Vatican Council, The Church in the Modern World [Gaudium et Spes], no. 12)