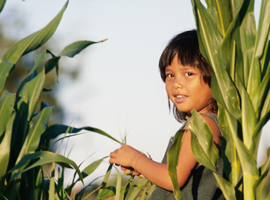 We show  our respect for the Creator by our stewardship of creation. Care for the earth  is not just an Earth Day slogan, it is a requirement of our faith. We are  called to protect people and the planet, living our faith in relationship with  all of God’s creation. This environmental challenge has fundamental moral and  ethical dimensions that cannot be ignored.

A true ecological approach always becomes a social approach; it must integrate questions of justice in debates on the environment, so as to hear both the cry of the earth and the cry of the poor. . . . Everything is connected. Concern for the environment thus needs to be joined to a sincere love for our fellow human beings and an unwavering commitment to resolving the problems of society. (Pope Francis, On Care for Our Common Home [Laudato Si'],nos. 49, 91)

The notion of the common good also extends to future generations. The global economic crises have made painfully obvious the detrimental effects of disregarding our common destiny, which cannot exclude those who come after us. We can no longer speak of sustainable development apart from intergenerational solidarity. Once we start to think about the kind of world we are leaving to future generations, we look at things differently; we realize that the world is a gift which we have freely received and must share with others. Since the world has been given to us, we can no longer view reality in a purely utilitarian way, in which efficiency and productivity are entirely geared to our individual benefit. Intergenerational solidarity is not optional, but rather a basic question of justice, since the world we have received also belongs to those who will follow us.  (Pope Francis, On Care for Our Common Home [Laudato Si'], no. 159)

We human beings are not only the beneficiaries but also the stewards of other creatures. Thanks to our bodies, God has joined us so closely to the world around us that we can feel the desertification of the soil almost as a physical ailment, and the extinction of a species as a painful disfigurement. Let us not leave in our wake a swath of destruction and death which will affect our own lives and those of future generations.(Pope Francis, The Joy of the Gospel [Evangelii Guadium], no. 215)

The  environment is God's gift to everyone, and in our use of it we have a  responsibility towards the poor, towards future generations and towards  humanity as a whole. . . Our duties towards the environment are linked to our  duties towards the human person, considered in himself and in relation to  others. It would be wrong to uphold one set of duties while trampling on the  other. (Pope Benedict XVI, Charity in Truth [Caritas in Veritate], nos. 48, 51)

Changes in lifestyle based on traditional moral virtues can ease the way to a sustainable and equitable world economy in which sacrifice will no longer be an unpopular concept. For many of us, a life less focused on material gain may remind us that we are more than what we have. Rejecting the false promises of excessive or conspicuous consumption can even allow more time for family, friends, and civic responsibilities. A renewed sense of sacrifice and restraint could make an essential contribution to addressing global climate change. (United States Conference of Catholic Bishops, Global Climate Change: A Plea for Dialogue, Prudence and the Common Good)

Equally worrying is the  ecological question which accompanies the problem of consumerism and which  is closely connected to it. In his desire to have and to enjoy rather than to  be and to grow, man consumes the resources of the earth and his own life in an  excessive and disordered way. . . . Man, who discovers his capacity to  transform and in a certain sense create the world through his own work, forgets  that this is always based on God's prior and original gift of the things that  are. Man thinks that he can make arbitrary use of the earth, subjecting it  without restraint to his will, as though it did not have its own requisites and  a prior God-given purpose, which man can indeed develop but must not betray.  Instead of carrying out his role as a co-operator with God in the work of  creation, man sets himself up in place of God and thus ends up provoking a  rebellion on the part of nature, which is more tyrannized than governed by him. (St. John Paul II, On the Hundredth Year [Centesimus Annus], no. 37)

The dominion granted to man by the Creator is not an absolute power, nor can one speak of a freedom to "use and misuse," or to dispose of things as one pleases. The limitation imposed from the beginning by the Creator himself and expressed symbolically by the prohibition not to "eat of the fruit of the tree" (cf. Gen 2:16-17) shows clearly enough that, when it comes to the natural world, we are subject not only to biological laws but also to moral ones, which cannot be violated with impunity. A true concept of development cannot ignore the use of the elements of nature, the renewability of resources and the consequences of haphazard industrialization - three considerations which alert our consciences to the moral dimension of development.(St. John Paul II, On Social Concerns [Sollicitudo rei Socialis], no. 34)