Life and Dignity of the Human Person 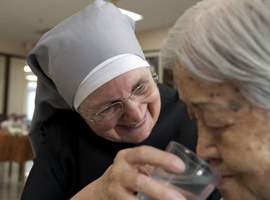 The Catholic Church  proclaims that human life is sacred and that the dignity of the human person is  the foundation of a moral vision for society. This belief is the foundation of  all the principles of our social teaching. In our society, human life is under  direct attack from abortion and euthanasia. The value of human life is being  threatened by cloning, embryonic stem cell research, and the use of the death  penalty. The intentional targeting of civilians in war or terrorist attacks is always wrong. Catholic teaching also calls on us to work to avoid war. Nations must protect the right to life by finding increasingly effective ways to prevent conflicts and resolve them by peaceful means. We believe that every person is precious, that people are more important than things, and that the measure of every institution is whether it threatens or enhances the life and dignity of the human person.

When we fail to acknowledge as part of reality the worth of a poor person, a human embryo, a person with disabilities – to offer just a few examples – it becomes difficult to hear the cry of nature itself; everything is connected. (Pope Francis, On Care for Our Common Home [Laudato Si'], no. 117)

Just as the commandment "Thou shalt not kill" sets a clear limit in order to safeguard the value of human life, today we also have to say "thou shalt not" to an economy of exclusion and inequality. Such an economy kills. How can it be that it is not a news item when an elderly homeless person dies of exposure, but it is news when the stock market loses two points? This is a case of exclusion. Can we continue to stand by when food is thrown away while people are starving? This is a case of inequality. Today everything comes under the laws of competition and the survival of the fittest, where the powerful feed upon the powerless. As a consequence, masses of people find themselves excluded and marginalized: without work, without possibilities, without any means of escape. Human beings are themselves considered consumer goods to be used and then discarded. We have created a "throw away" culture which is now spreading. It is no longer simply about exploitation and oppression, but something new. Exclusion ultimately has to do with what it means to be a part of the society in which we live; those excluded are no longer society's underside or its fringes or its disenfranchised – they are no longer even a part of it. The excluded are not the "exploited" but the outcast, the "leftovers". (Pope Francis, The Joy of the Gospel [Evangelii Gaudium], no. 153)

The dignity  of the individual and the demands of justice require, particularly today, that  economic choices do not cause disparities in wealth to increase in an excessive  and morally unacceptable manner. (Pope Benedict XVI, Charity  in Truth [Caritas in Veritate], no. 32)

Human persons are  willed by God; they are imprinted with God's image. Their dignity does not come  from the work they do, but from the persons they are. (St. John Paul II, On the Hundredth Year [Centesimus annus], no. 11)

The  basis for all that the Church believes about the moral dimensions of economic  life is its vision of the transcendent worth -- the sacredness -- of human  beings. The dignity of the human person, realized in community with others, is  the criterion against which all aspects of economic life must be measured.

All  human beings, therefore, are ends to be served by the institutions that make up  the economy, not means to be exploited for more narrowly defined goals. Human personhood must be respected with a reverence that is religious. When we deal  with each other, we should do so with the sense of awe that arises in the  presence of something holy and sacred. For that is what human beings are: we  are created in the image of God (Gn 1:27). (United States Conference of Catholic Bishops, Economic Justice for All, no. 28)

Every individual, precisely by reason of the mystery of  the Word of God who was made flesh (cf. Jn 1:14), is entrusted  to the maternal care of the Church. Therefore every threat to human dignity and  life must necessarily be felt in the Church's very heart; it cannot but affect  her at the core of her faith in the Redemptive Incarnation of the Son of God,  and engage her in her mission of proclaiming the Gospel of life in all the  world and to every creature (cf. Mk 16:15). (St. John Paul II, The  Gospel of Life [Evangelium vitae], no. 3)

As explicitly formulated, the precept “You shall not  kill” is strongly negative: it indicates the extreme limit which can never be  exceeded. Implicitly, however, it encourages a positive attitude of absolute  respect for life; it leads to the promotion of life and to progress along the  way of a love which gives, receives and serves. (St. John Paul II, The Gospel of Life no. 54)

This teaching rests on one basic principle:  individual human beings are the foundation, the cause and the end of every  social institution. That is necessarily so, for men are by nature social beings. (St. John XXIII, Mother and Teacher [Mater et Magistra], no. 219)

There exist also sinful inequalities that affect millions  of men and women. These are in open contradiction of the Gospel: Their equal  dignity as persons demands that we strive for fairer and more humane  conditions. Excessive economic and social disparity between individuals and  peoples of the one human race is a source of scandal and militates against  social justice, equity, human dignity, as well as social and international  peace. (Catechism of the Catholic Church, no. 1938)

Whatever  insults human dignity, such as subhuman living conditions, arbitrary  imprisonment, deportation, slavery, prostitution, the selling of women and  children; as well as disgraceful working conditions, where men are treated as mere tools for profit, rather than as free and responsible persons; all these things and others of their like are  infamies indeed. They poison human society, but they do more harm to those who  practice them than those who suffer from the injury. (Second Vatican Council, The Church in the Modern World [Gaudium et Spes], no. 27)