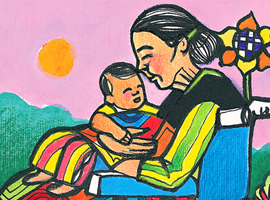 The Catholic tradition teaches that human dignity can be protected and a healthy community can be achieved only if human rights are protected and responsibilities are met. Therefore, every person has a fundamental right to life and a right to those things required for human decency. Corresponding to these rights are duties and responsibilities--to one another, to our families, and to the larger society.

“It frequently becomes clear that, in practice, human rights are not equal for all. Respect for those rights ‘is the preliminary condition for a country’s social and economic development. When the dignity of the human person is respected, and his or her rights recognized and guaranteed, creativity and interdependence thrive, and the creativity of the human personality is released through actions that further the common good.’ [18] Yet, ‘by closely observing our contemporary societies, we see numerous contradictions that lead us to wonder whether the equal dignity of all human beings, solemnly proclaimed seventy years ago, is truly recognized, respected, protected and promoted in every situation. In today's world, many forms of injustice persist, fed by reductive anthropological visions and by a profit-based economic model that does not hesitate to exploit, discard and even kill human beings. While one part of humanity lives in opulence, another part sees its own dignity denied, scorned or trampled upon, and its fundamental rights discarded or violated.’ [19] What does this tell us about the equality of rights grounded in innate human dignity?” (Pope Francis, Brothers and Sisters to Us [Fratelli Tutti], no. 22)

Underlying the principle of the common good is respect for the human person as such, endowed with basic and inalienable rights ordered to his or her integral development. It has also to do with the overall welfare of society and the development of a variety of intermediate groups, applying the principle of subsidiarity. Outstanding among those groups is the family, as the basic cell of society. Finally, the common good calls for social peace, the stability and security provided by a certain order which cannot be achieved without particular concern for distributive justice; whenever this is violated, violence always ensues. Society as a whole, and the state in particular, are obliged to defend and promote the common good. (Pope Francis, On Care for Our Common Home [Laudato Si'], no. 157)

Many of the poor live in areas particularly affected by phenomena related to warming, and their means of subsistence are largely dependent on natural reserves and ecosystemic services such as agriculture, fishing and forestry. They have no other financial activities or resources which can enable them to adapt to climate change or to face natural disasters, and their access to social services and protection is very limited. For example, changes in climate, to which animals and plants cannot adapt, lead them to migrate; this in turn affects the livelihood of the poor, who are then forced to leave their homes, with great uncertainty for their future and that of their children. There has been a tragic rise in the number of migrants seeking to flee from the growing poverty caused by environmental degradation. . . . Our lack of response to these tragedies involving our brothers and sisters points to the loss of that sense of responsibility for our fellow men and women upon which all civil society is founded. (Pope Francis, On Care for Our Common Home [Laudato Si'], no. 25)

A link has often been noted between  claims to a "right to excess", and even to transgression and vice, within  affluent societies, and the lack of food, drinkable water, basic instruction  and elementary health care in areas of the underdeveloped world and on the  outskirts of large metropolitan centers. The link consists in this: individual  rights, when detached from a framework of duties which grants them their full  meaning, can run wild, leading to an escalation of demands which is effectively  unlimited and indiscriminate. (Pope Benedict XVI, Charity  in Truth, [Caritas in Veritate], no. 43)

The inviolability of the person which is a reflection of  the absolute inviolability of God, finds its primary and fundamental expression  in the inviolability of human life. Above all, the common outcry, which  is justly made on behalf of human rights-for example, the right to health, to  home, to work, to family, to culture- is false and illusory if the right to  life, the most basic and fundamental right and the condition for all other  personal rights, is not defended with maximum determination. (St. John Paul II, On the Vocation and Mission of the Lay Faithful [Christifideles Laici], no. 38)

We must speak of man's rights. Man has the right to live.  He has the right to bodily integrity and to the means necessary for the proper development of life, particularly food, clothing, shelter, medical care, rest,  and, finally, the necessary social services. In consequence, he has the right to  be looked after in the event of ill health; disability stemming from his work;  widowhood; old age; enforced unemployment; or whenever through no fault of his  own he is deprived of the means of livelihood. (St. John XXIII, Peace on Earth [Pacem in Terris], no. 11)

In human society one man's natural right gives rise to a  corresponding duty in other men; the duty, that is, of recognizing and  respecting that right. Every basic human right draws its authoritative force  from the natural law, which confers it and attaches to it its respective duty.  Hence, to claim one's rights and ignore one's duties, or only half fulfill  them, is like building a house with one hand and tearing it down with the  other. (St. John XXIII,  Peace on Earth [Pacem in Terris], no. 30)

As for the State . . . It has also the duty to protect the rights of all its  people, and particularly of its weaker members, the workers, women and  children. It can never be right for the State to shirk its obligation of  working actively for the betterment of the condition of the workingman. (St. John XXIII, Christianity and Social Progress (Mater et Magistra), no. 20)