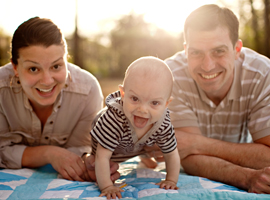 No one can fail to see the dramatic and distressing consequences of this pragmatism that conceives of truth and justice as malleable qualities that human beings themselves can shape.  One relevant example among others is man's attempt to control the sources of life through experiments in human cloning.  Here, we can see for ourselves the theme the Meeting [for Friendship Among Peoples] refers to: the violence with which people seek to appropriate the true and the just, reducing them to values which can arbitrarily be disposed of without recognizing any kind of limit, apart from those fixed and continuously surpassed by their technological operability.

...Christ taught another way: it is that of respect for human beings; the priority of every method of research must be to know the truth about human beings, in order to serve them and not to manipulate them according to a project sometimes arrogantly seen as better even than the plan of the Creator.


I am speaking of a tragic spiral of death which includes murder, suicide, abortion, euthanasia.... To this list we must add irresponsible practices of genetic engineering, such as the cloning and use of human embryos for research, which are justified by an illegitimate appeal to freedom, to cultural progress, to the advancement of mankind.  When the weakest and most vulnerable members of society are subjected to such atrocities, the very idea of the human family, built on the value of the person, on trust, respect and mutual support, is dangerously eroded.  A civilization based on love and peace must oppose these experiments, which are unworthy of man.

In any event, methods that fail to respect the dignity and value of the person must always be avoided.  I am thinking in particular of attempts at human cloning with a view to obtaining organs for transplants: these techniques, insofar as they involve the manipulation and destruction of human embryos, are not morally acceptable, even when their proposed goal is good in itself.  Science itself points to other forms of therapeutic intervention which would not involve cloning or the use of embryonic cells, but rather would make use of stem cells taken from adults.  This is the direction that research must follow if it wishes to respect the dignity of each and every human being, even at the embryonic stage.

Pope John Paul II, Address to the 18th International Congress of the Transplantation Society (2000), no. 8

[T]he distinction that is sometimes drawn between reproductive and therapeutic cloning seems specious.  Both involve the same technical cloning process and differ only in goal.  Both forms of cloning involve disrespect for the dignity of the human being.  In fact, from an ethical and anthropological standpoint, so-called therapeutic cloning, creating human embryos with the intention of destroying them, even if undertaken with the goal of possibly helping sick patients in the future, seems very clearly incompatible with respect for the dignity of the human being, making one human life nothing more than the instrument of another.  Further, given the fact that cloned embryos would be indistinguishable from embryos created by in vitro fertilization and could readily be implanted into wombs and brought to birth, we believe it would be practically impossible to enforce an instrument that allowed one type of cloning while banning the other.

Archbihop Celestino Migliore to the United Nations on the International Convention Against the Cloning of Human Beings (October 21, 2004)

Mr. Chairman, the science may be complex, but the issue for us is simple and straightforward.  The matter of human cloning that involves the creation of human embryos is the story of the beginning of human life....  If reproductive cloning of human beings contravenes the law of nature – a principle with which all delegations appear to agree – so does the cloning of the same human embryo that is slated for research purposes.  A cloned embryo, which is not destined for implantation into a womb but is created for the sole purpose of extraction of stem cells and other materials, is destined for pre-programmed destruction...

If the United Nations were to ban reproductive cloning without banning cloning for research, this would, for the first time, involve this body in legitimizing something extraordinary: the creation of human beings for the express purpose of destroying them.  If human rights are to mean anything, at any time, anywhere in the world, then surely no one can have the right to do such a thing.  Human rights flow from the recognition that human beings have an intrinsic dignity that is based on the fact that they are human.  Human embryos are human, even if they are cloned. If the rest of us are to have the rights that flow from the recognition of this dignity, then we must act to ban cloning in all its forms.

The Holy See looks upon the distinction between "reproductive" and so-called "therapeutic" (or "experimental") cloning to be unacceptable. This distinction masks the reality of the creation of a human being for the purpose of destroying him or her to produce embryonic stem cell lines or to conduct other experimentation.  Human embryonic cloning must be prohibited in all cases regardless of the aims that are pursued.  The Holy See supports research on stem cells of post-natal origin since this approach - as has been demonstrated by the most recent scientific studies - is a sound, promising, and ethical way to achieve tissue transplantation and cell therapy that could benefit humanity....

Cloning a human embryo, while intentionally planning its demise, would institutionalize the deliberate, systemic destruction of nascent human life in the name of unknown "good" of potential therapy or scientific discovery....  Since embryonic cloning generates a new human life geared not for a future of human flourishing but for a future destined to servitude and certain destruction, it is a process that cannot be justified on the grounds that it may be able to assist other human beings.

Intervention by the Holy See Delegation to the United Nations, at the Special Committee of the 57th General Assembly on Human Embryonic Cloning (2002)


The act of cloning is a predetermined act which forces the image and likeness of the donor and is actually a form of imposing dominion over another human being which denies the human dignity of the child and makes him or her a slave to the will of others.  The child would be seen as an object and a product of one's fancy rather than as a unique human being, equal in dignity to those who "created" him or her.  The practice of cloning would usurp the role of creator and would thus be seen as an offence before God....

There remains, however the fact that reproductive cloning is only part of the overall issue.  Therapeutic cloning, the production of human embryos as suppliers of specialized stem cells, embryos to be used in the treatment of certain illnesses and then destroyed, must be addressed and prohibited.  This exploitation of human beings, sought by certain scientific and industrial circles, and pushed forward by underlying economic interests, retains all its ethical repugnance as an even more serious offence against human dignity and the right to life, since it involves human beings (embryos) who are created in order to be destroyed.

Archbishop Renato Martino to the United Nations, on an International Convention Against the Reproductive Cloning of Human Beings (2001)


Since 1988, two great global divides have grown deeper: the first is the ever more tragic phenomenon of poverty and social discrimination ..., and the other, more recent and less widely condemned, concerns the unborn child ... as the subject of experimentation and technological intervention (through techniques of artificial procreation, the use of "superfluous embryos," so-called therapeutic cloning, etc.).  Here there is a risk of a new form of racism, for the development of these techniques could lead to the creation of a "sub-category of human beings," destined basically for the convenience of certain others.  This would be a new and terrible form of slavery.  Regrettably, it cannot be denied that the temptation of eugenics is still latent, especially if powerful commercial interests exploit it.  Governments and the scientific community must be very vigilant in this domain.

Pontifical Council for Justice and Peace, Contribution to the World Conference Against Racism held in Durban, South Africa (2001), no. 21


In the cloning process the basic relationships of the human person are perverted: filiation, consanguinity, kinship, parenthood....  In vitro fertilization has already led to the confusion of parentage, but cloning will mean the radical rupture of these bonds....

The "human cloning" project represents the terrible aberration to which value-free science is driven and is a sign of the profound malaise of our civilization, which looks to science, technology and the "quality of life" as surrogates for the meaning of life and its salvation....

Halting the human cloning project is a moral duty which must also be translated into cultural, social and legislative terms.


[A]ttempts or hypotheses for obtaining a human being without any connection with sexuality through "twin fission," cloning or parthenogenesis are to be considered contrary to the moral law, since they are in opposition to the dignity both of human procreation and of the conjugal union.

Congregation for the Doctrine of the Faith, Instruction on Respect for Human Life in its Origin and on the Dignity of Procreation (Donum vitae) (1987), I

Revising the name given to the killing reduces its perceived gravity.   This is the ecology of law, moral reasoning and language in action. Bad law and defective moral reasoning produce the evasive language to justify evil....  The same sanitized marketing is now deployed on behalf of...fetal experimentation and human cloning. Each reduces the human person to a problem or an object.


Human cloning does not treat any disease but turns human reproduction into a manufacturing process, by which human beings are mass-produced to preset specifications.  The cloning procedure is so dehumanizing that some scientists want to treat the resulting human beings as subhuman, creating them solely so they can destroy them for their cells and tissues....

While cloning may never produce any clinical benefit, its attack on human dignity has already begun.

Bishop Wilton D. Gregory, President of the U.S. Conference of Catholic Bishops, on reports that a biotechnology firm has cloned human embryos (2001)