A Muslim Serves her Country

The attacks on September 11, 2001 turned my life into a whirlwind of activities and intense soul searching to better understand how people of my faith could declare war on my country all in the name of my religion, Islam. As a Muslim and a military officer, my world changed for the worse because we were at war, and the enemy caused a distrust of the global Muslim community and scrutiny of American Muslims serving in the Armed Forces and in government agencies. 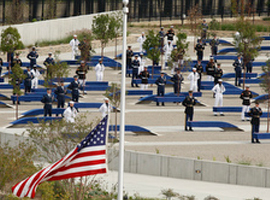 At this point in my military career, I had served over 20 years of active and reserve duty and was never ever so uncertain of my role in the military or in society.

Although, I was born a Muslim, my level of practice was limited until I became the youth leader within my Muslim community. During this time, I discovered my calling to become a chaplain as a way to serve my Muslim and military communities with the same career field rather than have two distinct career fields. Needless to say, my chaplaincy education began with great urgency because it was my second day at Hartford Seminary when 9/11 occurred. This was the first day that I felt any degree of fear since I came to the United States in 1972. I immediately knew the life I once had with all its freedoms was gone with uncertainty and unease as my new paradigm.

I was immediately confronted with the demands of becoming a representative for Muslims to help others better understand Islam and help explain why Muslims attacked America in the name of Islam. Despite the many Americans who reached out to help Muslims relay their panic and fear, the rhetoric of the media seemed to undo all this good will with their beating of the drums of war and unrest.

I lost hope in dreaming of a brighter future because of the sense of uncertainty of what could happen to Muslims. It was reported that many Muslims were taken to prison without anyone knowing where they were and not being afforded the right of counsel. I wondered if we all would be rounded up and placed into camps like the Japanese people and be treated as second-class citizens. Or would I have to leave the military because I couldn't be trusted? It was surreal living in the United States with the perceived negative media coverage against Muslims, the hostilities from fellow Americans and the flag waving to determine if we were patriotic Americans. A military colleague asked me why I wasn't waving a flag in my car and I responded, isn't it enough of a symbol for me to be wearing my military uniform in defense of my country?

I had the dual life experiences of being celebrated and despised depending upon which uniform I wore. When I wore my military uniform, people shook my hand and thanked me for my service to my country, and when I wore my Muslim garb with my head cover or hijab, people stared at me with comments like "go back to your country," which made me very sad and angry at the same time. At times, I wanted to whip out my military ID and say "please don't judge a book by its cover, because you don't know who is defending your freedoms." However, as a chaplain in training, I said nothing and walked away. My greatest lesson and gift came from the way people treated me, and I began loving people for the sake of God as the effects of shock and fear overtook our country. I realized the best thing I could do was to believe in myself, support people and continuously called upon God to help us restore the hope.

Along with God, four Muslim comedians called "The Axis of Evil," came to my rescue and gave me an extra degree of support to cope with the hopelessness and fear. Their humor helped me shake off the doom and gloom I felt and gave me permission to believe that all would be well again. I was able to laugh at the absurdity of what was happening around us and believe that this too shall pass. My personal experiences of being mobilized in support of Operation Iraqi Freedom and Enduring Freedom also increase my compassion and appreciation of my fellow military personnel putting their lives in harm's way along with the pluralistic faiths communities of America taking a stand for Muslims. Living in a post 9/11 world, I again began to see the gifts and blessings that showered us rather than focus on the negative rhetoric and actions of others.

On the tenth anniversary of 9/11, as I reflect on the changes that have occurred in my life, I feel the resiliency of my faith as the biggest strength in helping build bridges of understanding with my fellow Americans. I have persevered with patience, loving kindness, non-judgment and taken a stand to live in a pluralistic America that has liberty and justice for all no matter what race, gender, religion or personal affiliation.

Shareda Hosein is a graduate of Hartford Seminary, Hartford, Connecticut with a master's degree in Islamic Studies and Christian/Muslim Relations and a certificate in Islamic chaplaincy (equivalent to a Masters in Divinity). She is a lieutenant colonel in the U.S. Army Reserves and has been mobilized for Operation Iraqi Freedom and Enduring Freedom, serving as a cultural Advisor and a personnel officer.