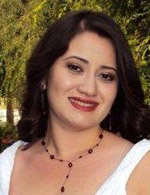 WASHINGTON— Rosibel “Rosy” Mancillas Lopez, a law student and advocate for immigration reform from San Diego, is the recipient of the 2011 Cardinal Bernardin New Leadership Award. The award is sponsored by the Catholic Campaign for Human Development (CCHD), the anti-poverty program of the U.S. Conference of Catholic Bishops (USCCB).

Mancillas Lopez, 24, will be honored for her work on behalf of immigrants at a reception Monday, November 14, during the U.S. bishops’ Fall General Assembly in Baltimore. Rosy became involved in immigrant advocacy work through a Catholic parish’s involvement with the San Diego Organizing Project (SDOP), a CCHD-funded group, to empower immigrants to know their rights. Rosy also leads delegations across the Mexican border, volunteers to provide legal advice to immigrants, and advocates to improve laws that affect immigrants. Her work with immigrant families and her family’s own experiences inspired her to pursue a law degree.

“Rosy draws on her faith and her family’s experience as Mexican immigrants to stand up for the dignity, rights and lives of people who have no one else to speak for them,” said Bishop Jaime Soto of Sacramento, California, chairman of the USCCB’s CCHD Subcommittee. “Both our country and the Church need more young people who are willing to take a stand for the vulnerable and voiceless.”

“My faith empowers me in all I do. It inspires me to work for love, compassion and justice,” said Mancillas Lopez. “It’s humbling to have my work singled out by the bishops for this award. I thank them for this honor and for the care and concern they’ve shown for immigrants.”

Mancillas Lopez is now studying at the University of San Diego Law School and serves as an assistant in the university ministry office.

The Cardinal Bernardin New Leadership Award honors a Catholic between the ages of 18 and 30 who demonstrates leadership in fighting poverty and injustice in the United States through community-based solutions. It is named for the late Cardinal Joseph Bernardin, former archbishop of Chicago and a leading voice on behalf of poor and low-income people, who understood the need to build bridges across ethnic, economic, class and age barriers.