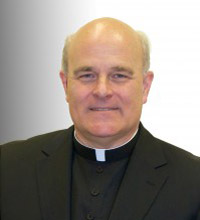 WASHINGTON—Father Michael J. Flynn, 57, a priest of the Diocese of Pensacola-Tallahassee, Florida, and associate professor of theology at Notre Dame Seminary in New Orleans, has been named executive director of the Secretariat for Divine Worship of the U.S. Conference of Catholic Bishops (USCCB).

He succeeds Msgr. Richard Hilgartner, who joined the USCCB in September 2007, and is returning to the Archdiocese of Baltimore in June 2014. Father Flynn’s appointment becomes effective June 30.

Father Flynn holds a licentiate in theology from The Catholic University of America; a master of divinity degree from Notre Dame Seminary, New Orleans; and a bachelor’s degree in music from Florida State University. He also completed an intensive German language immersion program at Goethe-Institut, Murnau, Bavaria, Germany. He was ordained a priest in 1994.

Father Flynn also has served on the faculty of St. Vincent de Paul Regional Seminary in Boynton Beach, Florida. In the Diocese of Pensacola-Tallahassee he was pastor at Resurrection Catholic Church in Miramar Beach, 2003-2007. He had previous assignments as parochial vicar in Pensacola and Tallahassee, where he also worked in campus ministry at Florida State University and the University of West Florida. He is a native of Birmingham, Alabama.

“The Divine Worship secretariat carries serious responsibility in assisting both the bishops’ conference and also ultimately the more than 17,000 parishes nationwide,” Msgr. Jenkins said. “The executive director of the office oversees liturgical celebrations of the bishops at national meetings, publication of liturgical books used in parishes all across the country, and statements addressed by the bishops on liturgical matters.”