CUBA: MARY AND THE POPE MADE A THREE DAY REVOLUTION

CUBA: MARY AND THE POPE MADE A THREE DAY REVOLUTION 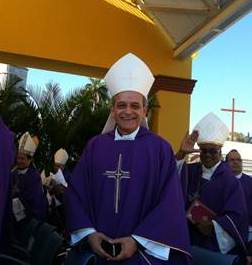 Four hundred years ago, whilestill under the Spanish Crown, a little statue of the Blessed Virgin Mary holding the infant Jesus in her arms was found by two Indians and a young slave floating off the coast of the Bay of Nipe in Cuba. The wooden plank on which the image rested had an inscription in Spanish that read "I am the Virgin of Charity".

She was revered immediately and a shrine was built for her nearby. Mysteriously, she kept disappearing from the shrine only to be found every time on a hill overlooking the copper mining town of El Cobre, which eventually became her permanent home. Since then, both the mine and the Blessed Virgin had been very generous to the people of Cuba.

Through the centuries, evangelization and many miraculous physical healings have been attributed to the intercession of the Mother of God under the name of the "Virgin of Charity of Copper" (Virgen de la Caridad del Cobre, the name taken because of the location where the holy image was found—near an area of copper mines).

The Cuban Conference of Bishops, desiring to highlight this important anniversary, graciously invited the Holy Father to visit the Island. Pope Benedict XVI happily accepted what would be the second visit of a pope to this country, after John Paul II's visit 14 years ago.

For over 50 years now the communist regime has unsuccessfully tried to control and dictate the people's faith and beliefs. During his three day visit to this small but vibrant country, the Holy Father and all the bishops present were impacted by the unquenchable spirit and spiritual strength of these Caribbean Islanders.

The Holy Father celebrated Mass in Santiago and Havana. Both celebrations were held in iconic communist plazas with the generous cooperation of the Government. Also participating respectfully during the celebrations was the current president, Raul Castro.

Over two hundred thousand Cubans attended both celebrations, and many more were present in the streets while the procession carrying the Blessed Virgin's image was joyfully brought to the gathering sites.

The liturgies and organization were flawless. There was a harmonious use of reverent solemnity using Latin and classical orchestral hymnals, skillfully combined with rhythms of salsa and Caribbean percussion.

In his homilies, the Holy Father clearly and firmly stated the need to change the political ideology that has tried and failed to control the beliefs and freedom of the people'sconsciences and souls — the same ideology that has led thousands of Cubans to flee their beloved country with broken lives and hearts.

The Bishops of the United States were well represented by Cardinal Sean O'Malley of Boston; Archbishop Thomas Wenski of Miami, who brought close to 700 participants, many of whom were Cubans exiled some 50 years ago or of Cuban descent; Bishop Gerald Kicanas of Tucson, Chairman of the Board of Catholic Relief Services; Bishop Richard Pates, Chairman of the USCCB Committee on International Justice and Peace; Cuban-American bishops Felipe Estevez from Orlando, Fernando Isern of Pueblo, and Octavio Cisneros, Auxiliary Bishop of Brooklyn. Bishop Cisneros and I represented the Subcommittee for the Church in Latin America, which helped with the remodeling of the Basilica of Our Lady of Charity and has supported many other projects in Cuba. The Committee continues its ongoing and generous support of our Cuban brothers and sisters who live in dire need.

A group of bishops from Spain came to enrich the occasion, as well as several from Venezuela, Colombia, Costa Rica, Santo Domingo and other Caribbean nations.

It touched me deeply to see the tears of our brothers and sisters rediscovering their land after 50 years. For some, it was an opportunity to regain contact with the families they left behind decades ago when forced to flee due to the economic and political circumstances and the persecution that was brought about by the regime that governs Cuba today.

On the second day of our visit, Tuesday the 27th, we had the chance to see a little more of Havana and glimpse the beauty and splendor the city had once had in the 1950s before the Revolution. We saw hundreds of buildings with elaborate and ornate architecture, falling into disrepair due to lack of maintenance.

We visited beautifully restored inner plazas, but moving deeper into Old Havana, we saw dire misery and hunger, despite our help with many projects.

The celebrations of the Blessed Virgin and the presence of the Holy Father brought three days of joy openly manifested by the people and shared with us everywhere. However, we could still sense the pain of blatant poverty, suspicion and fear of the regime mixed with waves of hope for a future that would bring liberty to every aspect of life.

Fourteen years ago the Pope's first visit brought many positive changes for the Church and people of Cuba. I am sure this new visit will bring about a dramatic increase of respectful dialogue with the regime, thus unearthing new treasures of unity.