Multitasking the key to many Cuban church functions

Multitasking the key to many Cuban church functions

HAVANA (CNS) -- The faces of the people doing the business of the Cuban Catholic Church are a reflection of a 50-year period of trying to keep the faith alive under circumstances that have been, at best, complicated and, at worst, downright hostile. 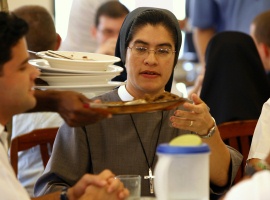 In the course of a few days in February spent visiting the cities that Pope Benedict XVI will see when he makes a pilgrimage to Cuba March 26-28, Catholic News Service encountered: two Spanish priests, an Argentine nun, four U.S. nuns, one permanent deacon and a wide variety of diocesan priests and laypeople running diocesan and national agencies. They all wore multiple hats.

The editor of a highly regarded magazine for the laity is also on the staff of the Havana Archdiocese's marriage tribunal. The deacon in charge of Santiago's mission commission also works at the Shrine of Our Lady of Charity of El Cobre, performing baptisms and other types of ministry.

The pastor of Havana's cathedral is also director of the Father Felix Varela Cultural Center. The woman in charge of lay leadership formation for the Santiago Archdiocese also oversees education for all laity and nonbelievers. And the four U.S. nuns who staff Havana's San Carlos and San Ambrosio Seminary handle cooking, laundry, sewing, teaching English, managing the chapel and library. One of them helped create the school's new website.

With only about 300 priests nationwide -- for comparison, there are nearly that many in the Archdiocese of Miami -- the church in Cuba has long been a place for multitasking.

What that leads to is church workers who have a pretty good understanding of multiple levels of the needs of ministry.

Argentine Sister Cecilia Medina Soria, a Claretian missionary who has been in Cuba for 16 years, is in charge of the youth ministry programs of the Archdiocese of Santiago de Cuba. Deacon Felix Humberto Gonzalez Barduena is coordinator of the Mission Commission of the same archdiocese.

In a joint interview, the two discussed their work. One goal for both is to give Cuban people hope and incentive to stay in the country and help it through its struggles.

"It is our hope to have people stay, stay and fight for Cuba," said Deacon Gonzalez.

"And the church offers them hope," finished the deacon. "We accompany them in the process."

A quartet of nuns from the United States also see their role as accompanying Cubans who will stay and work for the church in their country.

Since January 2011, four sisters of St. Francis of the Martyr St. George, based in Alton, Ill., have been working at the Havana seminary.

When they arrived, none spoke Spanish. Their assignment at the seminary happened with head-spinning speed, they said.

On a visit to the United States in the summer of 2010, Havana Cardinal Jaime Ortega Alamino stayed at the Washington residence of the apostolic nuncio, explained Sister Eva-Maria Ackerman, superior of the small contingent of sisters. While there he was impressed at the work by sisters of their order who staff the nunciature. The cardinal contacted the provincial and asked if sisters of the order could staff the new seminary, set to open the following January.

In a matter of a few months, all the paperwork was handled, arrangements made, and the sisters had left their jobs and packed up for Cuba.

Sister Eva-Maria had most recently been superior of a home for the elderly in St. Louis. Now she helps in the seminary's administration, including overseeing the launch of its website in early March.

Sister M. Wiltraud Alexander, a native of Germany who will turn 80 this spring, had been managing the chapel at the motherhouse in Alton. Her jobs at the seminary include working in its chapel and doing sewing.

Sister M. Philippa Poulos and Sister M. Seraphica Montez were teachers, respectively, at schools in Wildwood, Mo., and LaCrosse, Wis. Sister Philippa works in the seminary's kitchen and laundry but hastens to add that "our main role is to provide a feminine religious presence for the seminarians." Sister Seraphica teaches English, works in the library and keeps plants on the grounds alive, she said.

"It's been an overwhelming experience," said Sister Eva-Maria. "I didn't even think about Cuba before I was called to come here."

In conversations at the seminary and in follow-up emails, the sisters talked about the struggles of being away from their community and family in the U.S., of missing a Big Mac, fries and a Coke from McDonald's. They described their own education processes: learning Spanish, adjusting to a simpler kind of life and getting to know the Cuban people.

Sister Seraphica said her hardest struggle is for "patience! Patience with learning the life of a new culture, patience learning a new language and a new way of doing things."

Sister Philippa said she was a bit surprised to learn how simply Cubans live.

"Their diets are simple. They don't have the busy, hectic lifestyles of Americans," she said, adding, "they do without many things and still are happy people."

Among their own lessons, Sister Wiltraud said she wishes that North Americans understood that "the Cuban people are very creative and very kind and that Cuba is a beautiful country."

Sister Eva-Maria observed that "some Cubans know a lot more about the American way of life than we sisters know. They listen to American music, wear clothes with logos from the U.S. and view our movies."