Learn more about the places Pope Francis will visit during his September 22-27 visit to the United States. Note: All event times listed below are Eastern Daylight Time.

Pope Francis will arrive at Joint Base Andrews located just outside the District of Columbia in Prince George's County, Maryland. Known as the home of Air Force One, Andrews is also often the landing site for heads of state when they visit the United States. The base is under the command of the Air Force District of Washington and is served by its 11th Wing.

President Barack Obama and First Lady Michelle Obama and other dignitaries will be there to welcome the Pope.

The first meeting on PopeFrancis's itinerary will be at the White House the official residence and primary workplace of the United States president. Located at 1600 Pennsylvania Ave, NW, the White House has been the home of every president since 1800. After a welcoming ceremony, Pope Francis is expected to meet privately with President Barack H. Obama.  The White House last hosted a pope in May, 2008, when Pope Benedict XVI was welcomed by President George W. Bush and First Lady Laura Bush.

Named for the patron saint of civil servants, the Cathedral of St. Matthew the Apostle is the mother church for Catholics in the Archdiocese of Washington.  Located in downtown DC at 1725 Rhode Island Ave., NW, the cathedral was the site of the 1963 funeral Mass of John F. Kennedy, the nation's first Catholic president.  It is also the site of the annual Red Mass that precedes the opening of the Supreme Court of the United States' regular term every October. At the cathedral, Pope Francis will lead the bishops of the United States in Midday Prayer from the Liturgy of the Hours.

Wednesday, September 23, 4:15 p.m.
Basilica of the National Shrine of the Immaculate Conception

Located at 400 Michigan Avenue in northeast Washington, DC, and adjacent to the campus of the Catholic University of America (CUA), the basilica is the nation's preeminent Marian shrine. The shrine is dedicated to the patroness of the United States, the Blessed Virgin Mary and houses more than 70 chapels and oratories. It is the largest Roman Catholic church in the US and one of the ten largest churches in the world. Pope Francis will preside at the canonization Mass of Blessed Junipero Serra from the east portico of the shrine with the worship space extending across the adjacent University Mall on the CUA campus.
Thursday, September 24, 9:20 a.m.
United States Capitol

The United States Capitol is located on the eastern end of the National Mall in Washington, DC. It is the meeting place of the nation's legislature, whose members will gather for a Joint Meeting on this day to hear an address by Pope Francis.  It is important to note that this gathering should not be referred to as a joint session of the US Congress; such sessions can only be convened by the President of the United States. Of note among the many treasured artworks in the Capitol Building is a bronze statue of Junipero Serra in Statuary Hall that was presented by the State of California in 1931.  Following his canonization on September 23, the Franciscan missionary will be known as St. Junipero Serra.

Located at 619 Tenth St., NW, between "F" and "G" Streets, St. Patrick's is home to the oldest Catholic parish in Washington, DC, and was the first church of any denomination to be built in the city.  Established to serve the city's Irish immigrants, St. Patrick's continues that tradition with a special Mass every year on March 17, St. Patrick's feast day.

Adjacent to the church on G Place NW, is the headquarters of Catholic Charities of the Archdiocese of Washington, one of the largest private social service providers in the area. During his visit to Catholic Charities, Pope Francis is expected to pass by a 7-foot long bronze sculpture in front of the building that depicts a person lying on a bench under a blanket called "Homeless Jesus."

St. Patrick's Cathedral is the seat of the Archbishop of New York, Timothy Cardinal Dolan. It is the largest decorated gothic-style Catholic Cathedral in the United States and has been recognized throughout its history as a center of Catholic life in this country. A renovation of the cathedral's exterior and interior spaces that was begun in 2012 is nearly complete and Pope Francis will see the results of that work when he leads Evening Prayer (Vespers) there on September 24.

The iconic United Nations headquarters building is situated alongside the East River in midtown Manhattan. Within the 18-acre complex the UN General Assembly, the Security Council, the Economic and Social Council, and other bodies and committees hold their meetings. 2015 marks the 70th anniversary of the 193-member organization.

Where once stood the the twin towers of the World Trade Center in lower Manhattan, the 9/11 Memorial & Museum occupy a space defined by in-situ historic remnants of those buildings.  The memorial pays tribute to the 2,983 men, women, and children killed in the 9/11/01 attacks and in the bombing of the World Trade Center in February 1993.  Pope Francis will be the first pope to visit the Memorial where he will participate in a multi-religious service. He is the second pope to visit this site of the worst terrorist attack on the United States of America. Pope Benedict XVI prayed at the site during his 2008 visit to the United States while the museum and memorial were still under construction.

Pope Francis's New York itinerary includes a stop at a Catholic school in East Harlem that has been serving that community for more than 120 years. The student population at Our Lady Queen of Angels School (OLQA) includes many children of immigrants and children who are themselves immigrants. At the school, the Pope will be greeted by 150 immigrants and refugees hailing from Central and South America, Africa and Asia, all of whom are beneficiaries of programs run by Catholic Charities of the Archdiocese of New York.

Situated over Penn Station between West 31st and 33rd Streets in Manhattan, the legendary arena where Pope Francis will celebrate the only Mass on his New York schedule is home to the NBA's New York Knicks, the NHL's New York Rangers, and the WNBA's New York Liberty.  "The Garden" has also been the site of countless other sporting, entertainment, and special events since it opened in its current location in 1968, including one previous papal Mass. Pope John Paul II celebrated a Mass for youth at Madison Square Garden during his first visit to the United States in October 1979. As he made his entrance into the arena,  Pope John Paul II was greeted by loud chants of “John Paul II, we love you” from the youthful crowd. 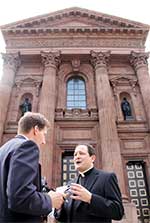 The Cathedral Basilica of Saints Peter and Paul is the mother church of the Archdiocese of Philadelphia. Open since 1864 and located at the East side of Logan Square on 18th Street and the Benjamin Franklin Parkway, the cathedral is the largest brownstone structure in Philadelphia and the largest Catholic Church in Pennsylvania. Pope Francis will celebrate Mass at the cathedral for clergy, religious and lay Catholics of the Archdiocese of Philadelphia.

Independence Mall is part of Philadelphia's large Independence Park complex that stretches from Race Street at the north end to Walnut Street south in the southeastern part of the city. The mall is bookended by the National Constitution Center on the north, Independence Hall on the south, and Fifth and Sixth Streets on the east and west, respectively.  Pope Francis is expected to speak at this event about religious freedom and immigration. Pope Francis will also bless a five-foot tall wooden cross, known as “the Cross of the Encuentros” symbolizing the journey of faith of Hispanic/Latino Catholics in the United States upon his arrival to Independence Mall.

Stretching from City Hall to the Philadelphia Museum of Art, the tree-lined Benjamin Franklin Parkway is a scenic boulevard that runs through the cultural heart of the city. Named for US founding father and Pennsylvania favorite son Benjamin Franklin, the mile-long Parkway cuts diagonally across the Center City's Northwest quadrant. Pope Francis will come to this location for the Festival of Families, an international celebration of family, community, and faith, that is being held in conjunction with the World Meeting of Families. The 90-minute event will include musical performances, readings and remarks by Pope Francis.

Saint Charles Borromeo Seminary is the oldest Catholic institution of higher learning in the Archdiocese of Philadelphia.The seminary was established in 1832 with the fundamental mission of the formation of Catholic men for pastoral service in the Roman Catholic priesthood in the Archdiocese of Philadelphia. The seminary now also serves several partner dioceses and religious communities. At the seminary, Pope Francis will greet bishops from around world who have been participating in the World Meeting of Families. He will also pose for a photograph with seminarians in homage to a similar photo taken with Pope John Paul II in 1979.

The Curran-Fromhold Correctional Facility is the largest unit in the Philadelphia Prison System (PPS) and is named in honor of a PPS warden and deputy warden who were killed in the line of duty. Pope Francis will meet here with about 100 young inmates, including 25 women, inmates' family members and facility staff.  Philadelphia Archbishop Charles J. Chaput will speak to the significance of the chair Pope Francis will use at the facility, which was made by inmates and staff.

Pope Francis will return to the stage of the Festival of Families to celebrate the Closing Mass of the 2015 World Meeting of Families.

Pope Francis will meet with organizers, volunteers and benefactors of the 2015 World Meeting of Families at a private Atlantic Aviation facility in the Philadelphia International Airport before departing for Rome at 8:00 p.m.