"The Apostolic See… offers for imitation, veneration and invocation by the faithful those men and women who are renowned for the splendor of their love as well as the other evangelical virtues and, after conducting the appropriate investigations, declares with a solemn act of canonizations that they are saints."

"Totus tuus" or "Totally yours"

"I simply wish to note that the figure of Mary of Nazareth sheds light on womanhood as such by the very fact that God in the sublime event of the Incarnation of his Son, entrusted himself to the ministry, the free and active ministry of a woman. 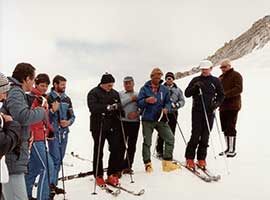 "Only in Christ can men and women find answers to the ultimate questions that trouble them. Only in Christ can they fully understand their dignity as persons created and loved by God. Jesus Christ is "the only Son from the Father…full of grace and truth."

"When there is a question of defending the rights of individuals, the defenseless and the poor have a claim to special consideration. The richer class has many ways of shielding itself, and stands less in need of help from the State; whereas the mass of the poor have no resources of their own to fall back on, and must chiefly depend on the assistance of the State. It is for this reason that wage-earners, since they mostly belong to the latter class, should be specially cared for and protected by the government." (Rerum Novarum)…the more that individuals are defenseless within a given society, the more they require the care and concern of others, and in particular the intervention of governmental authority."

"I invoke the comforting and strengthening gifts of God's unfailing love upon those who suffer from AIDS and upon all those who are generously engaged in caring for them.At the same time I appeal to those who are working to find an effective scientific response to this illness not to delay and above all not to allow commercial considerations to detract from their committed efforts."

Globalization will have many positive effects if it can be sustained by a strong sense of the absoluteness and dignity of all human persons and of the principle that earthly goods are meant for everyone.There is room in this direction to operate in a fair and constructive way, even within a sector that is much subject to speculation.For this it is not enough to respect local laws or national regulations; what is necessary is a sense of global justice, equal to the responsibilities that are at stake, while acknowledging the structural interdependence of the relations between human beings over and above national boundaries."

"Justice, wisdom and realism all demand that the baneful positions of secularism be overcome, particularly the erroneous reduction of religion to the purely private sphere.Every person must be given the opportunity within the context of our life together to profess his or her faith and belief, alone or with others, in private and in public."

—John Paul II, Message on the 13th Anniversary of the Universal Declaration of Human Rights, 1978.

"The situation of the world's migrants and refugees seems ever more precarious.Violence sometimes obliges entire populations to leave their homeland to escape repeated atrocities; more frequently, it is poverty and the lack of prospects for development which spur individuals and families to go into exile, to seek ways to survive in distant lands, where it is not easy to find a suitable welcome."

"In Christ, God calls all peoples to himself and he wishes to share with them the fullness of his revelation and love.He does not fail to make himself present in many ways, not only to individuals but also to entire peoples through their spiritual riches, of which their religions are the main and essential expression, even when they contain 'gaps, insufficiencies, and errors.'"

"To modern men and women, often dissatisfied with a shallow and ephemeral existence, and in search of authentic happiness and love, Christ offers his own example and issues the invitation to follow Him.He asks those who hear his voice to give their lives for others. This sacrifice is a source of self-fulfillment and joy, as is seen in the eloquent example of those men and women who, leaving all security behind, have not hesitated to risk their lives as missionaries in different parts of the world. It can also be seen in the response of those young people who, prompted by faith, have embraced a vocation to the priesthood or the religious life in order to serve God's plan of salvation.

Respect for life requires that science and technology should always be at the service of man and his integral development.Society as a whole must respect, defend and promote the dignity of every human person, at every moment and in every condition of that person's life.