(16.) The family, founded upon marriage freely contracted, one and indissoluble, must be regarded as the natural, primary cell of human society. The interests of the family, therefore, must be taken very specially into consideration in social and economic affairs, as well as in the spheres of faith and morals. For all of these have to do with strengthening the family and assisting it in the fulfilment of its mission

(11) Man has the right to live. He has the right to bodily integrity and to the means necessary for the proper development of life, particularly food, clothing, shelter, medical care, rest, and, finally, the necessary social services. In consequence, he has the right to be looked after in the event of illhealth; disability stemming from his work; widowhood; old age; enforced unemployment; or whenever through no fault of his own he is deprived of the means of livelihood. 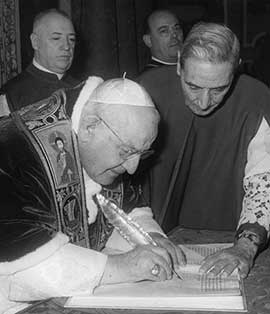 (71.) We therefore consider it our duty to reaffirm that the remuneration of work is not something that can be left to the laws of the marketplace; nor should it be a decision left to the will of the more powerful. It must be determined in accordance with justice and equity; which means that workers must be paid a wage which allows them to live a truly human life and to fulfill their family obligations in a worthy manner

(15.) Certainly, Venerable Brethren, when one views the faith which distinguishes the Church, the sacraments which nourish and perfect her, the universal laws and precepts which govern her, the unfailing glory that is hers by reason of the heroic virtue and constancy of so many of her elect, there can be no doubt that the Bride of Christ, so dear to her divine Redeemer, has always kept herself holy and unsullied.

On the Second Vatican Council:

(36) Everyone wants the forthcoming Ecumenical Council to give all possible impetus to the spread of Christianity. It must give louder and louder utterance to that "word by which the kingdom is preached" mentioned in the parable of the sower, and help to bring about the wider extension of "the kingdom of God" in the world. But all this must depend to a large extent on the dispositions of the souls which the Council will be endeavoring to inspire to truth and virtue, to the worship of God both in private and in public, to a disciplined life and to missionary zeal.

(48) And a devotion to the Eucharist that is ardent, constant and that carries over into works also has the effect of nourishing and fostering the inner perfection of his soul and assuring him, as he carries out his apostolic duties, of an abundance of the supernatural powers that the strongest workers for Christ must have.

On the Second Ecumenical Vatican Council:

The Ecumenical Council will surely be, even more than a new and magnificent Pentecost, a real and new Epiphany, one of the many revelations which have been renewed and are continually being renewed in the course of history, but one of the greatest of all.

From his Spiritual Testament:

Born poor, but of humble and respected folk, I am particularly happy to die poor, having distributed, according to the various needs and circumstances of my simple and modest life in the service of the poor and of the holy Church which has nurtured me, whatever came into my hands –and it was very little –during the years of my priesthood and episcopate.

In the hour of farewell, or, better, of leave-taking, I repeat once more that what matters most in this life is: our blessed Jesus Christ, his holy Church, his Gospel, and in the Gospel above all else the Our Father according to the mind and heart of Jesus, and the truth and goodness of his Gospel, goodness which must be meek and kind, hardworking and patient, unconquerable and victorious.

On the Holy Rosary:

This is the rosary of Mary, considered in its various elements, which are linked together in vocal prayer and woven into it as in a delicate and rich embroidery, full of spiritual warmth and beauty.

On being elected Pope:

To have accepted with simplicity the honour and the burden of the pontificate, with the joy of being able to say that I did nothing to obtain it, absolutely nothing; indeed I was most careful and conscientious to avoid anything that might direct attention to myself. As the voting in Conclave wavered to and fro, I rejoiced when I saw the chances of my being elected diminishing and the likelihood of others, in my opinion truly most worthy and venerable persons, being chosen.