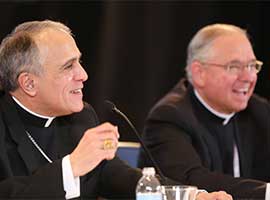 The United States Conference of Catholic Bishops (USCCB) elected three new officers during their November 2019 General Assembly. They are:

Vice President, Most Reverend Allen H. Vigneron, Archbishop of Detroit was elected USCCB vice president on November 12, 2019. He previously served as USCCB Secretary. His term as vice president also ends at the conclusion of the November 2022 USCCB General Assembly.

Secretary, Archbishop Timothy P. Broglio of the U.S. Archdiocese for the Military Services. Archbishop Broglio was elected USCCB Secretary on November 12, 2019 to fill the vacancy left when Archbishop Vigneron was elected vice president. His term will expire at the conclusion of the November 2021 USCCB General Assembly.

The officers of the United States Conference of Catholic Bishops (USCCB) serve three-year terms. For the Conference Treasurer, Secretary, and chairmen of Conference standing committees, the term of office is preceded by service as "chairman elect" or "officer-elect" for one year.

The Treasurer is responsible for the management of Conference funds and, according to the needs of the Conference, for methods of sound fiscal administration. The Treasurer also holds the position of Vice Chairman for the Committee on Priorities and Plans.

The Secretary serves as Chairman of the Committee on Priorities and Plans, keeps minutes of the Plenary Assemblies and of the meetings of the Administrative Committee.