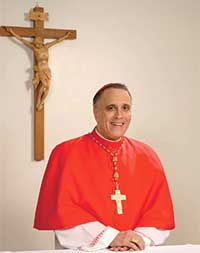 His Eminence Daniel Cardinal DiNardo is the metropolitan archbishop of Galveston-Houston and pastor to its 1.3 million Catholics (and over 4 million non-Catholics) and 440 priests in 146 parishes and 60 schools spread over 8,880 square miles. His seats are St. Mary Cathedral Basilica in Galveston and the Co-Cathedral of the Sacred Heart in Houston.

Born in Steubenville, Ohio, and raised with three siblings in Castle Shannon near Pittsburgh, Cardinal DiNardo attended St. Anne grade school and the Jesuit-run Bishop's Latin school before enrolling in St. Paul Seminary and Duquesne University in Pittsburgh. He received his master's degree in philosophy from the Catholic University of America in Washington, D.C. and degrees of Sacred Theology from both the Pontifical Gregorian University and the Patristic Institute Augustinianum in Rome.

He was ordained to the priesthood for the Diocese of Pittsburgh on July 16, 1977 and served as parish pastor, seminary professor, spiritual director, and in the chancery. From 1984 to 1991, he worked in Rome as a staff member for the Congregation for Bishops, as director of Villa Stritch (the house for American clergy), and as adjunct professor at the Pontifical North American College. In 1991 he returned to Pittsburgh, serving as pastor to several parishes and again in the chancery.

He was appointed coadjutor bishop of Sioux City, Iowa and ordained there as a bishop in October 1997. As his Episcopal motto he adopted: Ave Crux Spes Unica, meaning "Hail the Cross, Our Only Hope." He succeeded retiring Bishop Lawrence Donald Soens of Sioux City in November of 1998.

He was named coadjutor bishop (later coadjutor archbishop) of Galveston-Houston in January 2004 and succeeded Archbishop Joseph Fiorenza on February 28, 2006. On June 29, 2006, he received the pallium from Pope Benedict XVI. He was elevated to the College of Cardinals in November of 2007 at St. Peter's Basilica in Rome. As a member of the Sacred College, he served as a Cardinal-Elector in the Papal Conclave of 2013, which saw the election of Pope Francis to the See of Peter. In November of the same year, he was elected by his brother bishops as the Vice-President of the United States Conference of Catholic Bishops (USCCB) for a three-year term. He was elected President of the USCCB on November 15, 2016. He is a member of the Pontifical Council for Culture, the Pontifical Council for the Pastoral Care of Migrants and Itinerant People, the Pontifical Council for the Economy, and is on the Board of Trustees of The Catholic University of America in Washington, D.C.